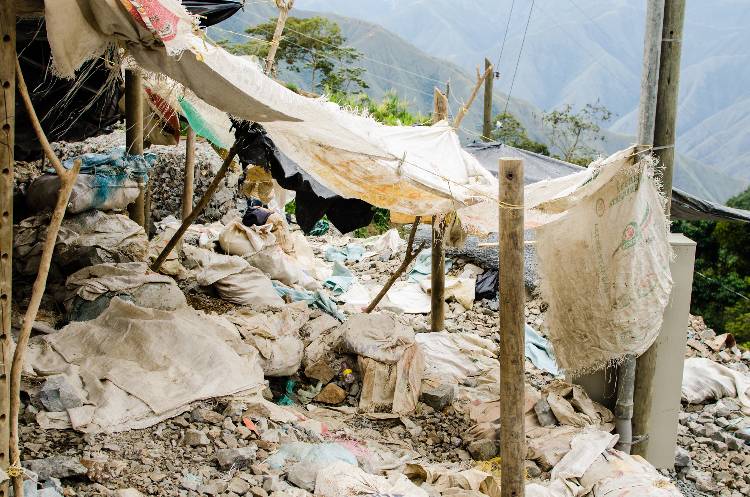 Three years ago, Buriticá was a sleepy farming village tucked away in the mountains of Antioquia in northwest Colombia. Now, it is a gold rush frontier town replete with deathtrap mines, ramshackle huts, prostitutes, drugs, and narco-paramilitaries — a metamorphosis that could become ever more common as Colombia’s illegal gold miners, who have their roots in the country’s civil conflict, seek new opportunities.

No one in Buriticá really knows how it all began. Some say the illegal miners followed on the heels of Canadian mining company Continental Gold. Others say it came after a TV documentary publicized the revival of legal gold mining in the region. Still others say an influential figure from the illegal mining heartland of northeast Antioquia spread word of the opportunities on offer. However, everyone agrees on one point: the people of Buriticá have lost their town.

Officially, the municipality of Buriticá (in Colombia, the capital city of the municipality carries the same name) has a population of just over 7,000 people. However, officials and residents say it is probably closer to 12,000. Most of the new residents have descended from municipalities of Segovia, Remedios and Amalfi in the northwestern state of Antioquia that have a long history of illegal mining linked to organized crime.

Predominantly young single men, they brought with them dangerous and damaging illegal mining techniques and a thirst for quick money and fast living. Accompanying them were the overseers of much of Colombia’s illegal mining trade — the narco-paramilitary groups known as the BACRIM (from “Bandas Criminales” or “Criminal Bands”).

Working Under the Urabeños

While local government officials said they had no official confirmation of what they believe — that the BACRIM control the mining sector — residents are more forthcoming.

“We known the miners are with others, they have the support of other groups,” said one local community leader, who did not wish to be identified for security reasons. “We can’t say anything about the situation because those that are higher up will come, so we have to keep quiet.”

According to Colombian conflict monitoring group Indepaz, which produces the country’s most detailed annual breakdown of the presence of the BACRIM, two groups, the Urabeños and the Rastrojos, first appeared in Buriticá sometime in 2011.

However, these days, the Urabeños are the real power in the region. Antioquia is one of the group’s strongholds, while the now fractured Rastrojos have not maintained a serious presence in the state since ceding control of their mining interests in the north as part of a 2011 pact.

The Urabeños presence in Buriticá was also confirmed in 2012 with the arrests of five alleged members and the seizure of a stash of weapons and equipment in the municipality.

The Urabeños emerged from the United Self-Defense Forces of Colombia (Autodefensas Unidas de Colombia – AUC). The AUC, a coalition of right-wing paramilitary groups that served as the state’s proxy army for nearly a decade in its fight against guerrillas, demobilized in 2006, but many of its mid-level commanders and soldiers remained actively part of the criminal economy. Over time, they have diversified their criminal portfolios, with activities such as micro-trafficking, extortion and mining becoming increasingly important sources of revenue. 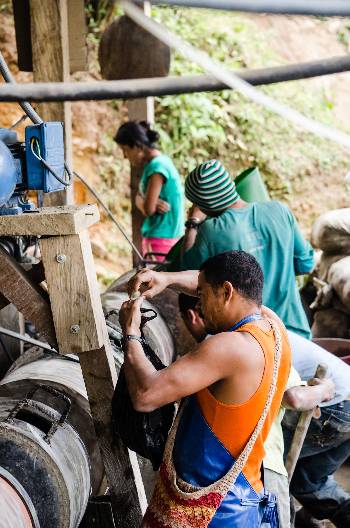 In Buriticá, the men work under the auspices of the Urabeños in mines known locally as “huecos” (holes), which are gouged out of territory titled to Continental Gold. Conditions inside are cramped, airless and dangerous.

“It is inhuman,” said Antonio Maria Hidalgo, who works in the Continental Gold mine and is a member of the local environmental roundtable. “I don’t know how these people psyche themselves up to work there every day.”

The miners use illegal explosives known as “polvo loco” (crazy powder) to extract their product. Burns, loss of limbs, and fatalities are common, either from the powder exploding while the miners are using it or from the explosions that cause mines to cave in.

Officially, there have been 12 deaths and over 40 injuries in 120 illegal mines over the last year, according to El Colombiano. However, locals say there have been many more. Some go unreported or are covered up by the mine “owners” to avoid unwanted attention. In other cases, no one knows who was in a mine when it collapsed.

In addition to the polvo loco, the outsiders also brought another damaging technique associated with Colombia’s illegal mining sector to Buriticá: the use of mercury to extract gold. As well as seeping into the region’s soils and waters, the highly toxic chemical is also released into the air as a gas when the gold is separated from the ore.

The long term effects of mercury use — damage to the central nervous system and the lungs, mental health issues, birth defects — have yet to manifest themselves in Buriticá, but the pollution from use of mercury and other mining-related contamination has already devastated the agricultural industry, the traditional mainstay of the local economy. One local farmer told InSight Crime how his crops now only grow to a stunted height before withering and dying. Others repeated this claim, although there has not, as of yet, been any scientific research done to determine the levels of mercury in the soil.

According to residents, the Urabeños control every facet of the illegal mining trade, charging each mine a monthly protection fee, the size of which varies according to the size of the mine, but also controlling the sale of mercury and explosives, the new businesses — legal and illegal — set up to cater for the miners, and the activities of the shadowy companies that purchase the gold off the miners — the “compras de oro” (gold buyers).

The compras de oro in particular are now a major source of concern to locals. Before the arrival of illegal mining, there were just a handful of compras de oro, which were well known to locals and sold the gold they purchased directly to the Banco de la Republica — Colombia’s central bank. Now, there are around a dozen such businesses located in the town and around the mines, and nobody knows who the owners are or where they sell their gold.

“It is still a mystery,” said Diego Guzman, the Secretary for the Interior in the Buritica mayor’s office. “These places fund the gold mining; they buy the gold. But I don’t know when they take it out of the town, or how they take it out, or whether they sell it in Medellin, Bogota, or wherever.”

Although residents also say they cannot be sure who is behind the compras de oro, they are convinced the businesses are at the center of the illegal mining trade, and that the BACRIM are behind their spread.

“The word is, although it is not proven, that these are money laundering operations — [drug traffickers] have a lot of cash and the compras de oro legalize it,” said the community leader.

If the locals’ suspicions are correct, then this would fit a pattern seen throughout Antioquia and Colombia’s other gold mining hotspots. It has long been common for criminal groups to purchase gold from illegal miners, often at prices higher than the official ones set by the bank, then sell it on to official outlets claiming it has been bought from legal mines that in reality are nothing but a façade.

The influence of criminal groups in Buriticá is now likely to expand further as Buritiqueños say more men come to seek their fortune in the area’s illegal mines every day. In this, the town is not alone; mining — both legal and illegal is currently proliferating rapidly across the country.

The illegal mining sector now outstrips drug trafficking as the main source of criminal income for armed groups in eight of Colombia’s 32 departments, according to a study published last year, and this is likely to expand, particularly as national criminal groups continue to fragment and local factions turn to local sources of income.

In this new gold rush, the situation in Buritica may well represent the future for many other towns and villages around Antioquia and other mining hotspots.

For the Buritiqueños though, it is hard to even imagine a future. Many residents are refugees from past fighting between the AUC and the guerrillas.

“All we can do about these things we see is leave or stay quiet and endure, each time a little bit more,” said Amparo Jimenez, a member of the environmental roundtable.

“Maybe we Buritiqueños will be forced to be displaced,” she said. “We were displaced once before, and now we could be for the second time, because this is hitting us hard.”

The flood of illegal miners has also created a raft of social problems. Local drug trafficking and prostitution networks have sprung up in and around the mines. New bars line the roads near the mines and issues associated with heavy drinking, such as casual violence and traffic accidents, are now rife. 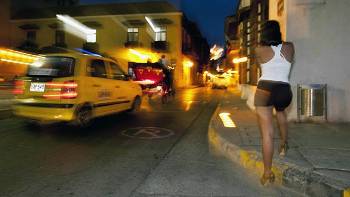 “They work, and they sell the gold. Right there by the mines are the bars, strip shows, restaurants,” said Hidalgo. “It is a rough life. They work to drink. They don’t think about improving their quality of life.”

The rapid population increase has also placed a huge strain on public services and led to severe overcrowding. There is now more trash than the municipal garbage trucks can haul away, water has to be rationed in dry periods, and schools and hospitals are overflowing.

Many of the miners live in hastily-erected shacks consisting of little more than poles and plastic sheets, which now cover the mountainsides and the road leading out of town. Others have secured accommodation in the town, often by offering to pay a cash advance then moving in as many as 30 people into a single house.

After the advance expires, the rent money on the properties often dries up, but the house owners are too intimidated to evict the reputedly violent tenants.

“People are scared of them because you never know who you are getting mixed up with,” said Hidalgo. “There are dark forces that came with them.”