Authorities in Colombia have seized 34,000 gallons of contraband fuel and arrested 30 suspects, in a series of operations highlighting the extent of a lucrative illicit trade fed largely by illegal Venezuelan imports. 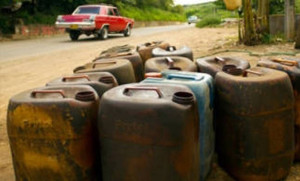 The seizures took place in various departments of Colombia, the majority concentrated near the Venezuelan border. According to General Gustavo Moreno Maldonado, director of the tax and customs police, the majority of illegal border crossings used by fuel traffickers are concentrated in three departments: La Guajira (192 crossings) and Norte de Santander (48) in the northeast of the country, and Nariño (28) in the southwest, near the Ecuador border, reported EFE.

Moreno cited the town of La Paz in the northeastern department of Cesar as a place where “nearly the entire population has learned to live from this illegal economy.”

Moreno said fuel is often transported in hidden plastic containers on public buses, and that children are also used to transport the contraband product. According to Moreno, authorities have “declared war on contraband fuel,” which is controlled largely by criminal groups such as the Urabeños.

This year, authorities have seized 256,436 gallons of fuel and arrested 106 people in connection with the illicit trade.

Colombia’s problem with contraband fuel is driven by high domestic prices, which stand in stark contrast to neighboring countries. Both Venezuela to the northeast and Ecuador to the southwest implement subsidies that keep gas prices low, at about $1.10 a gallon in Ecuador and as little as 18 cents a gallon in Venezuela. In Colombia, gasoline is sold for around $4.72 a gallon.

Fuel is not the only illegal product flooding Colombia and Moreno said in June that Colombia’s contraband trade is worth $6 billion a year and is facilitated by inadequate inspections. La Guajira is also a major point of entry for black market products including liquor and cigarettes.

The Urabeños are just one of the major criminal organization responsible, with the Rastrojos and the Revolutionary Armed Forces of Colombia (FARC) also deeply involved the trade.

The contraband fuel trade is a major problem region wide, with fuel illegally moved from Ecuador to Peru worth about $40 million a year, and illegally imported fuel from Venezuela costing Honduras about $230 million each year.