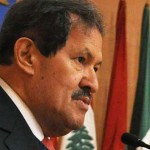 Colombia Vice-President Angelino Garzon said Thursday he will not be President’s Juan Manuel Santos running mate in the 2014 elections.

In a radio interview, Garzon said that “I don’t want to be the running mate of any candidate for the Presidency of the Republic.”

Santos announced his ambition to run for a second term on Wednesday, explaining that he hopes to ”finish the work that we have started between all of us.”

However, the president will have to look for a different running mate than in the 2010 elections as Garzon made clear that “on August 8 [, the day after the presidential inauguration,]I will not be vice-president” any longer.

Instead, Garzon — who suffered severe health problems during his three years in office — said that in 2015 he will be “taking a decision and will announce my intention regarding the Bogota or Cali mayor’s office.”

The current VP is a former labor union leader.