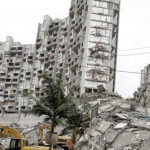 Colombia’s vice-president has called for companies to stop sending bills for subscription TV, home loans and utilities to former-residents of a building that collapsed a month ago, killing 11 people in Colombia’s second biggest city Medellin.

The Ombudsman Jorge Armando Otalora says he has received numerous complaints from former residents of the tower six of the  Space building, a 24-story, brand-new housing complex in Medellin’s prosperous Poblado neighborhood which collapsed on October 12.

A team of ten construction workers sent in to inspect the damage were killed along with at least one resident, with two other residents who were inside the building survived but were seriously injured.

The Ombudsman reported that the former-residents were being charged for subscription television and utility bills, despite the destruction of their homes.

After meeting with the former-residents for a second time on Tuesday, Vice-President Angelino Garzon said the companies lacked solidarity.

“It seems very serious. They are the victims and the companies are charging them for apartments like it is business as usual.  How can you say you will charge a service to the victims?” Garzon said.

He also criticized major Colombian banks for continuing to collect mortgage fees in the wake of the disaster.  Caracol Radio reported that many of the families had continued to pay their mortgages on time, even though the apartments were destroyed.

“They are thinking about money, not people.” Garzon said.

Last night, city officials and families paused to mark one month since the tragedy.