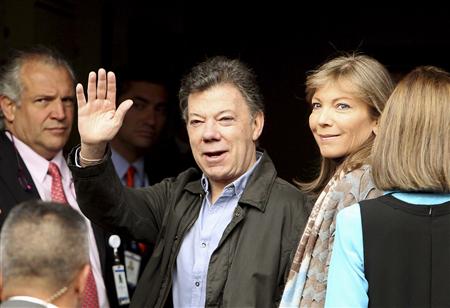 Midway through his four-year term, Santos surprised the Andean nation on Monday by announcing that doctors had discovered a cancerous growth on his prostate.

He said the disease had been caught in time and there was minimal risk.

“Thank God, everything went well. I’m recuperating well. My family and I are very grateful for all your support,” Santos said in a message on Twitter after the surgery.

His medical team said earlier on Wednesday the operation to remove the prostate had been successful and there had not been any complications.

” He has started drinking fluids, has asked for something to eat, has been able to sit in bed, therefore I think he has evolved very, very well,” Sa ntos’ urologist, Dr. Felipe Gomez, told reporters outside the Fundacion Santa Fe hospital in northern Bogota where the surgery took place.

Doctors said the tumor was extracted under local anesthesia and that it had not spread.

” His vital signs have remained stable . … T he president will continue being monitored by doctors as planned, ” s aid Adolfo Llinas, the hospital’s medical director.

Santos’ treatment will not require chemotherapy, Gomez has said, and the president will likely spend two to three days in the hospital. A complete recovery will likely take up to three weeks.

He is not allowed to travel during his recovery, but will be able to carry out his official duties.

The Harvard-educated economist, who took office two years ago, said earlier this week he had a 97 percent chance of beating the disease.

Santos, a conservative whose policies have fueled economic growth in the country, is about to start peace talks with the Revolutionary Armed Forces of Colombia (FARC), the Marxist-inspired insurgency that killed tens of thousands over 50 years.

A peace deal would help secure Santos a place in history and allow him to build on the economic and security advances that began under former President Alvaro Uribe a decade ago.

Colombia, a nation of about 46 million people, has attracted record foreign direct investment over the last few years as a U.S.-backed military offensive against drug traffickers and FARC rebels improved business confidence.

“Thanks to the (Patron Saint) of Miracles for the operation’s result. Today, more than ever, we need the president,” Vice President Angelino Garzon, wh o had a stroke earlier this year, said via Twitter.

Santos received message s from Israel’s and Britain’s prime ministers wishing him well, and was visited by Colombia’s defense and foreign ministers after the operation.

Venezuela’s Hugo Chavez, who is seeking re-election on Sunday, has undergone three operations for tumors since mid-2011.

Former Brazilian President Luiz Inacio Lula da Silva was successfully treated for a throat tumor this year and his successor, President Dilma Rousseff, was treated for lymphoma in 2009.