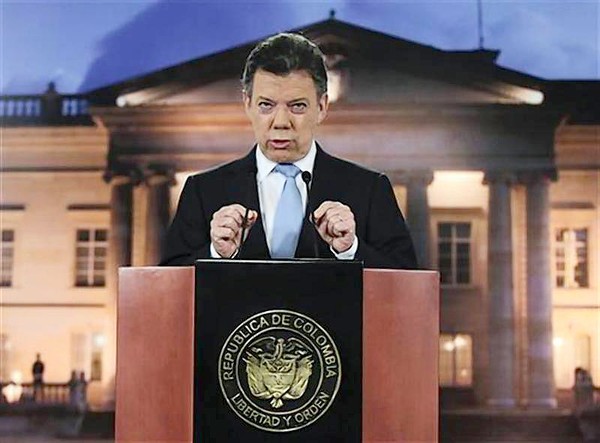 BOGOTA (Reuters) – The last Colombian president to negotiate with Marxist rebels says current leader Juan Manuel Santos will face an even tougher time in new talks because of opposition from the far right and doubts about whether rebel leaders are united.

Andres Pastrana led the last attempt at peace more than a decade ago, but those talks collapsed and they were seen as having helped the Revolutionary Armed Forces of Colombia, or FARC, build up their fighting forces.

Half-way through his four-year term, Santos is staking his reputation and political future on a new round of peace talks set to start in October with the drug-funded FARC rebels, who took up arms almost 50 years ago in a conflict that has killed tens of thousands.

Pastrana is warning that possible divisions inside the FARC could make it a lot more difficult to reach a peace deal.

“Are the FARC united? Are all the (FARC divisions) in the negotiation?,” Pastrana asked rhetorically in an interview late on Tuesday with Reuters at his office.

“During our negotiation, one knew that when (FARC founder Manuel) Marulanda was there and took a decision, it was monolithic. Today, are these decisions monolithic or is there a front that wants to continue drug trafficking or that doesn’t want to enter into a peace process? That is the doubt.”

Pastrana’s negotiations from 1999 to 2002 gave rebels a demilitarized area the size of Switzerland, but further talks collapsed after guerrillas hijacked an airplane.

The failure paved the way for conservative Alvaro Uribe to take over the presidency with a clear mandate to crack down on the FARC.

A decade of Uribe’s U.S.-backed offensive more than halved the guerrilla army’s ranks and pushed it back to remote jungle and mountain hide-outs.

Down but not out, the FARC increased its attacks in the last two years of Uribe’s government and has continued to harass government forces since Santos took office.

Elected in a landslide in 2010 promising to keep up Uribe’s tough stance, Santos has seen his approval ratings drop, with many Colombians believing that the security gains during Uribe’s presidency have been reversed.

While most Colombians approve of peace talks set to start in Norway next month and then move to Cuba, polls show that more than half would oppose any deal allowing FARC leaders to participate in politics or giving them an amnesty for crimes committed in the conflict – likely to be two key issues in negotiations.

Uribe has become the most vocal critic of Santos on security policy, saying he has been too soft on the FARC and will be negotiating from a position of weakness.

According to a poll by Ipsos Napoleon Franco published this week, 54 percent of Colombians do not want to see Santos re-elected in 2014.

THE FORCES ARRAYED AGAINST PEACE TALKS

Pastrana questioned why the FARC rebels did not include anyone on their negotiating team from the “Southern Block”, which is the most powerful of its regional divisions and has the strongest links to drug trafficking.

“It does raise questions that people like (FARC secretariat member and Southern Block commander) Joaquin Gomez aren’t at the table, a guy who maintains military control. And Joaquin Gomez is where the heart of drug trafficking is,” Pastrana said.

The FARC negotiating team is widely seen as coming more from its political wing. Only one known member of its ruling seven-member secretariat is expected to participate in the talks.

Santos promises his government has learned from the mistakes of previous leaders who tried but failed to clinch a lasting deal, and he has been cautious when talking about the possible success of the discussions.

Santos’ government and the FARC have set an agenda for talks that includes the rights of victims, land ownership in rural areas and cocaine production and smuggling.

Pastrana said that Santos would go up against the ultra-right in trying to carry out reforms, specifically new criminal gangs that emerged out of the demobilization of right-wing paramilitaries between 2003 and 2006.

The gangs are less ideological than their paramilitary predecessors and more interested in protecting their criminal enterprises, though still heavily linked to the far-right.

A key Santos reform and a demand by the FARC – giving stolen land back to displaced peasants – has already run into heavy resistance in former paramilitary areas, meaning that any future land reform that could emanate from the talks would face resistance.

Pastrana said the country was more divided now than it was when he tried negotiations.