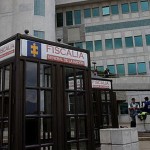 Colombia’s Prosecutor General’s Office on Monday announced to open 13 more criminal investigations against businessmen, politicians and former city officials over a public works corruption scandal that has the capital’s former mayor in jail.

The full list of new suspects is as following:

Following the announcement of the new investigations, Romero sent a letter to Prosecutor General Eduardo Montealegre in which the presidential candidate’s husband demanded a speedy trial and claimed he was the victim of a conspiracy that sought to discredit his wife’s candidacy.

Lopez, who assumed the Mayor’s Office after former Mayor Samuel Moreno was forced to resign over the multi-million-dollar scandal, told press she would not make statements about her husband’s criminal investigation.