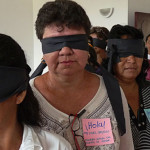 Of the 1,169 cases reportedly under investigation, most have been committed by guerrilla and paramilitary groups, according to Justice and Peace Coordinator Carlos Augusto Cabana.

“There are 1,169 investigations of cases of sexual violence under way. Of these, 624 correspond to the heads and members of the AUC [now defunct paramilitary group] and to FARC commanders,” Cabana was quoted as saying in a recent report released by the Prosecutor General’s Office.

Cabana speculated that much of the sexual violence acts directed against women in the context of armed conflict are committed with the intention of indirectly attacking a victim’s spouse or family member.

“When women were dehumanized, the attacks were directed at the wife of the commander or against a woman that they thought had contact with a member of another armed group, which was considered as an act against the enemy,” explained Caban.

Within the ranks of the FARC rebel group, girls and women are often recruited by force and face sexual abuse, forced prostitution, sexual slavery and forced abortions, according to the report.

This stands in line with a warning by Colombia’s Ombudsman over increased violence against women in Colombia which was published last week.

Regarding paramilitary groups, Cabana reported of the systematic use of violence against men and part of the LGBT population in order to “intimidate the community and demonstrate power in the different areas affected by their activities.”

The age of victims varies between 5 and 79, while 25% of the cases under investigation affected minors under 14-years-old. The majority of cases, however, involved adolescents between ages 15 and 18.