Police in Colombia appear to be closing in on the country’s most wanted criminal, the military leader of the mighty Urabeños, Dario Antonio Usuga, alias “Otoniel.” 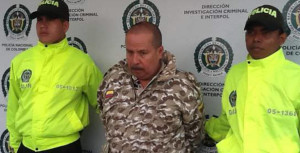 The captures of Arley Usuga Torres, alias “07,” and Nini Johanna Usuga, seem to indicate that the police are tightening the noose around Otoniel. The arrests of the nephew and sister of the Urabeños chief is evidence that the police are zeroing in on Otoniel’s inner circle and support network. “07” was picked up in Turbo, a strategic port in Uraba, the region from which the Urabeños take their name. Nini Johanna Usuga, who is believed to handle part of the Urabeños finances, was arrested in the nearby city of Medellin. Police estimate she managed up to $4 million a month in illegal earnings.

The US State Department is offering $5 million for information leading to the arrest of Otoniel.

Since the death of his brother, Juan de Dios Usuga, alias “Giovanni,” in a police operation on New Year’s Day 2012, Otoniel has been the most visible head of the BACRIM (from the Spanish “bandas criminales”), Colombia’s latest generation of drug trafficking syndicates, and the priority target for Colombian authorities. What is perhaps more notable, is not that the Colombian police are getting close, sweeping up his relatives, but that Otoniel is still directing the ever expanding Urabeños. He is still believed to remain in the heartland of Colombia’s most powerful criminal franchise, in the region of Uraba, a steamy valley in northwestern Colombia known for its banana production.

With so many Colombian and US resources dedicated to his killing or capture, it seems inevitable that Otoniel will fall, sooner or later. But if there is one lesson to be learnt from the “decapitation” policy that Colombia, backed by the United States, has employed since the hunt for Pablo Escobar, it is that someone will inevitably rise to replace the fallen criminal leader.

This is evidenced by the fact there are already whispers of a new “capo de capos” emerging on Colombia’s eastern plains. Once the haunt of Daniel “El Loco” Barrera, Colombia’s most prolific drug trafficker until his capture in September 2012, the eastern plains are one of the most important drug trafficking regions. From here multi-ton shipments of cocaine move into neighboring Venezuela and Brazil. Loco’s replacement is known as “Puntilla” Pachon, whose criminal pedigree apparently stretches back to Escobar’s Medellin Cartel, and who worked closely with Loco until his arrest in Venezuela. Pachon, it appears, has made an alliance with Otoniel and become part of the Urabeños franchise.