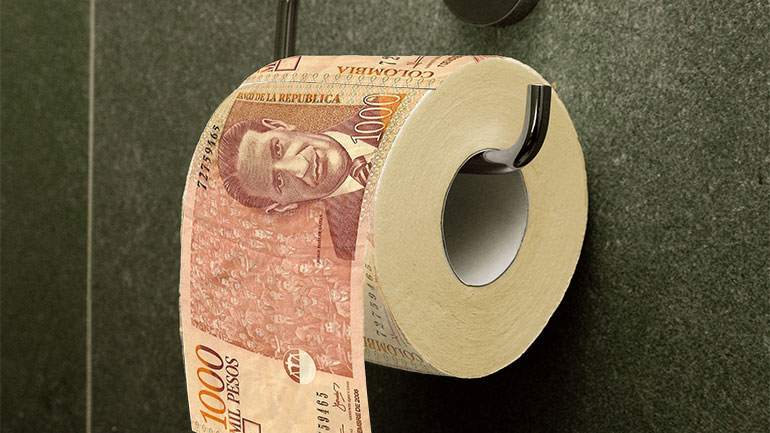 The Colombian peso has depreciated more than most predicted and on Monday even dropped to a historic low: One dollar is now worth COP3,300.

During Monday’s trading the dollar peaked at COP3,324 and ended the day at COP3,308, a value not measured in the entire history of Colombia’s currency.

The depreciation is mainly because over the past decade, Colombia’s exports have increasingly become dependent on oil exports.

When global commodity prices began dropping in September last year, Colombia and other oil-dependent emerging economies saw their revenue and export figures drop in what has been called the bursting of the emerging markets and commodity bubbles.

How the weak peso will really hurt workers

The decrease in value of the peso has spurred Colombia’s inflation rate, which is currently at 6.11% or double what Colombia’s Central Bank had anticipated at the beginning of the year.

The latest peso drop and an expected further increase in inflation is almost certain to hurt the wallets of more than half of Colombia’s employed population in 2016.

Some 55% of formally employed Colombians earn minimum wage, according to a 2013 study.

Unions, employers and the government traditionally negotiate the increase of the coming year’s minimum wage in December.

Because unions and employers have a history of not being able to find consensus on this issue, the government has in effect been defining an increase in minimum wage.

Over the past years, the custom has been to link the coming year’s minimum wage increase to the inflation rate of the past year.

The administration of President Juan Manuel Santos has increased minimum wage more than the inflation rate in efforts to curb economic inequality and poverty.

However, Santos was doing this in economic heydays during which the country was enjoying massive increases in oil revenue that was followed by lowering unemployment figures and poverty rates.

But for the first time in years, 2015’s unemployment figures are up, economic growth is down and the government is facing a major budget deficit.

Choosing between spending power and unemployment

Employers have long argued that excessive increases in minimum wage impede the creation of jobs and can even cause lay-offs if the economic tide is adverse.

But if next year’s minimum wage hike is lower than the inflation rate, Colombian workers earning the current minimum wage of $195/month would become significantly poorer.

Avoiding a decrease in spending power of workers seems virtually impossible, mainly because the current inflation hike is not expected to spontaneously stop on January 1, but continue throughout 2016.

This means that while minimum wage is fixed for a year on January 1, prices will continue to go up, slowly decreasing the spending power of more than half of Colombia’s labor force.

The government has already announced austerity measures for its 2016 budget, but the way the Colombian economy is going predicts that millions of Colombian households will also have to tighten their already very tight belt.