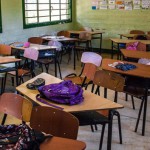 Colombia’s ombudsman on Wednesday called on authorities to protect more than a thousand teachers that are being threatened throughout the country.

The Ombudsman, Jorge Armando Otalora, visited the northern state of Cordoba after 145 teachers in the region reported that they had been threatened.

According to Otalora, the number of unreported threats could be significantly higher than the 1,117 that are currently registered.

In urban areas the threats primarily come from students’ parents or gangs, while in rural areas they mostly stem from rebel groups like the FARC or neo-paramilitary groups like the Urabeños or Rastrojos.

Furthermore, the ombudsman explained that the threats commonly are part of extortion rackets, offering “protection” for a monthly payment followed by threats against the victims and their families.

In the last reported case, pamphlets signed by the Rastrojos were distributed in a Cordoba high school on November 19, threatening 11 students with death, creating an atmosphere of fear throughout the school.

Otalora called on all responsible authorities to do everything possible to clarify the reported cases and take the necessary measures to protect educational institutions from threats.