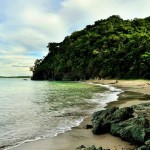 A new national park in Colombia will aim to contribute to the preservation of two of the world’s most endangered sea turtle species.

The Acandi Playon-Playona park is located on the Panamanian border and on the Caribbean coast and will constitute as number 58 of the National Parks System in Colombia.

The total area of 64,800 acres include the coastal area of La Playona and El Playon in the city of Acandi situated in the northern end of the state Choco.

The marine area has become an essential conservancy, because of the migration of the hawksbill and the leatherback turtle. The latter is the world’s largest sea turtle and both are considered some of the world’s most endangered species.

The hawksbill turtle has become a symbol of the region that developed a “Festival of the Hawksbill Turtle” as a strategy to create awareness and education on preservation among tourists and locals.

New restrictions also limit industrial fishing to 64247.4 acres of the marine area as it is the habitat of over 80 different species of fish.

The declaration of the protected area also contributes to the commitment to the  Convention on Biological Diversity, which states that by 2020, at least 17% of inland water areas and 12% of marine and coastal areas will be preserved.