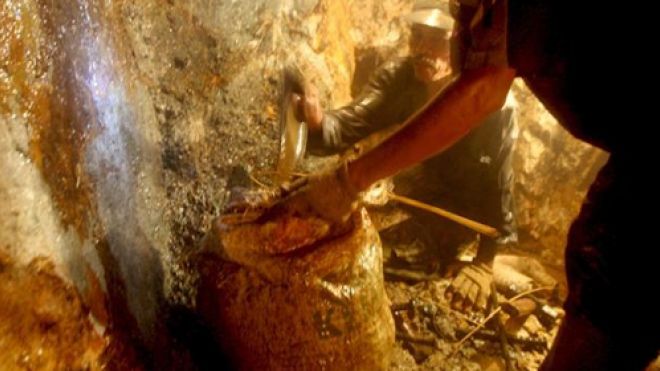 Once deemed the cocaine capital of the world, Colombia is now falling behind its Andean neighbors in coca production and instead criminal organizations in the country are shifting to another valuable product as a source of income: gold.

According to a study released by the Spanish conflict-analysis organization the Toledo International Center for Peace (CITpax), illegal gold mining has overtaken coca production as the top source of income for Colombia’s organized crime and guerrilla groups including the Revolutionary Armed Forces of Colombia (FARC). Potential cocaine production in Colombia is down by 72 percent since 2001 and the country now ranks third  in cocaine production, behind Peru and Bolivia, Gil Kerlikowske, director of the Office of National Drug Control Policy, said earlier this summer.

The report states that in eight of Colombia’s 32 provinces, gold mining has become the top source of income for these groups who have taken an advantage of an uptick of so-called “mom-and-pop” mining operations through extortion.

The rising price of gold on the world market – an ounce currently is worth over $1,700 – has helped contribute to a proliferation of the business, said Adam Isacson, a senior associate for regional security policy at the Washington Office on Latin America. A small mine is also easier to hide, as opposed to a coca field, and illegal gold mining is off the radar of U.S. authorities more concerned with anti-drug tactics, he said.

“Gold from Colombia is certainly coming to the U.S. and to the rest of the world market,” Isacson said.

He said it’s unclear what contacts these gold groups have in the United States but hypothesized that the business is run by brokers working in Colombia.

The CITpax report states 86 percent of Colombia’s gold is mined illegally, with around 20 percent of the profits from mines going to the FARC, with the National Liberation Army (ELN) and other criminal organizations controlling smaller shares.

Colombia’s organized crime, guerrilla and paramilitary groups have exploited other elements and minerals for sale as well. Paramilitary groups are heavily involved in country’s illegal emerald trade and last month the Colombian navy seized 400 kilos of illegally mined tungsten, a rare metal, near the country’s border with Venezuela.

The FARC may be illegally extracting tungsten for use in the construction of projectile explosives. The Colombian trafficking group ELN, as well as the Rastrojos and Urabeños, are also allegedly involved in the business.

Isacson said that before the armed groups targeted gold mining, the operations were generally “mom-and-pop.” But now that these organizations have seen the profit that accompanies gold mining, and they have honed in on these small mines.

Groups like the FARC make profits from the illegal gold mines by taxing the “mom-and-pop” operations. But recently, they have also started running their own operations and employing local workers to mine the gold.

Another problem in Colombia that has allowed the illegal mining business to flourish is a lack of oversight from the central government in the country’s more isolated regions.

“Despite all the progress, about half of Colombia is still a country that has no national government,” Isacson said, adding that there are few roads in some rural regions and it is difficult for the army or law enforcement to patrol these areas.

Gold mining, however, is still prevalent in some of the country’s most developed departments such as Antioquia, which is home to Colombia’s second largest city, Medellín.

The peace talks between the FARC and the government of President Juan Manuel Santos probably won’t broach the topic of illegal mining. However, even if demobilization is discussed in the peace talks, which is scheduled to begin this October in Norway, not all FARC members would be willing to give up gold mining since it has become so lucrative.

“These gold mines function as ATMs for the FARC, instant money,” Isacson said. “The question in the peace talks is: “Will the FARC be able to deliver their leaders involved in gold mining who are making a lot of money?’”