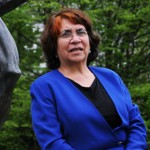 The Patriotic Union (UP), a Colombian communist party that saw thousands of members assassinated after its formation in the 1980s, on Saturday elected its candidate for the 2014 presidential election.

The party will be represented in the presidential election by Aida Abella, a senior party members who had spent the past 17 years in exile due to the political violence directed at the party with outspoken ties to rebel group FARC.

Abella told her fellow-party members she would be seeking guarantees from the Colombian government to avoid violence that killed more than 3,000 UP members. The decimation of members finally led to the dismantling of the party by electoral authorities that in 2002 concluded the party lacked the popular support needed to take part in elections.

The UP “genocide” was one of the main reasons the FARC and government included “political participation” to ongoing peace negotiations; The deadly violence aimed at what was considered the FARC’s political wing has caused great distrust in the guerrilla organization.

The UP was originally formed in 1985 as part of a partial peace agreement between the FARC and then-President Belisario Betancur. Since then, paramilitaries, drug traffickers and state agents killed two presidential candidates, eight congressmen, 13 state deputies, 70 members of city councils, 11 mayors and according to the most conservative estimations some 3,000 sympathizers.