Bogotá, Colombia –  Gen. Jorge Enrique Mora spent a professional lifetime battling Colombia’s rebels, whose assaults on troops under his command have compelled him to attend more funerals than most could bear. 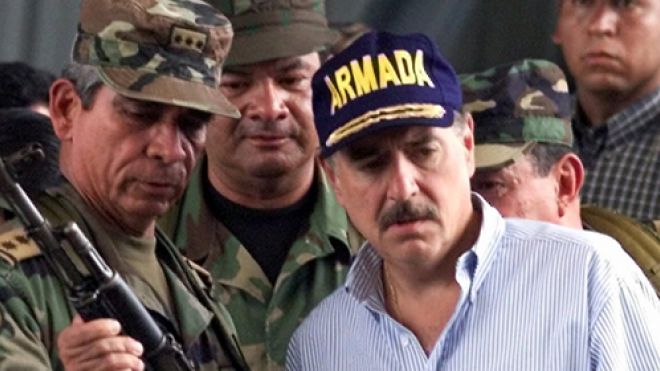 On Monday, though, he sits down with them to talk peace, and the former armed forces chief may be the key to whether the negotiations that open in the Norwegian capital of Oslo succeed or fail.

Mora and other military men were accused of trying to sabotage negotiations the last time the government held talks to try to end its half-century-old conflict with the Revolutionary Armed Forces of Colombia, or FARC, the country’s main leftist insurgency.

During the talks from 1999 to 2002, the government allowed the rebels a Switzerland-sized safe haven and decreed a cease-fire, outraging Mora and his cohort.

For him they were simply “bandits, drug traffickers and terrorists.” The army commander at the time, he dragged his feet in removing troops from the safe haven, and the military repeatedly defied civilian leaders by ordering overflights that rattled the rebels.

This time, as a renewed effort to obtain peace with those same rebels opens formally in Oslo before moving to Cuba in late October, President Juan Manuel Santos opted not to exclude the soldiers.

Santos knows he needs the military’s blessing to sell to the public, and the barracks, on any deal that might be struck. So he put Mora on the five-man team.

“One of many reasons why the last peace process failed was that they didn’t have buy-in from the armed forces,” said Adam Isacson, a Colombia expert at the Washington Office on Latin America. “Getting them involved early was smart, so they couldn’t play the role of spoilers.”

Mora represents a constituency that has done a good deal of the dying a conflict that has claimed tens of thousands of lives. Hundreds of troops are killed annually, hundreds more maimed by mines.

Soldiers and police have also been captured and held, in some cases, for more than a decade in jungle prisons. The FARC released the last of those prisoners in April as a condition for the launch of secret talks in Havana.

“While we have no trust (in the guerrillas), we can’t oppose this process,” said, “because the country wants peace.” An opinion poll published last month by Semana magazine found 77 percent of Colombians support the peace talks. It polled 1,012 people in 13 cities and had an error margin of 3 percentage points.

Like other military men, Ruiz was heartened when Santos made it clear military operations will continue until a peace deal can be reached in which the FARC will be obliged to disarm. This time around, there will be neither a cease-fire nor a safe haven for the rebels.

As the 1999-2002 talks dragged on, the rebels continued to attack Mora’s troops outside the safe haven and he publicly complained that the FARC continued to kidnap while expanding its cocaine trafficking.

The military brass was also incensed when the chief government peace negotiator, Victor G. Ricardo, gave FARC leaders copies of legal documents held by the public prosecutor’s office detailing accusations of abuses by armed forces members. The FARC had demanded that all soldiers accused of human rights violations be tried by civilians courts.

That issue is certain to come up again, especially given how sullied the armed forces’ human rights record was during a U.S-backed military buildup overseen by then-President Alvaro Uribe from 2002-2010 that transformed it into a more professional force.

The armed forces dealt FARC rebels unprecedented blows, reclaiming most of the country, radically reducing rebel kidnapping and extortion and inspiring waves of guerrilla desertions. But hundreds of soldiers, some ranking as high as colonel, committed extrajudicial killings. In some cases, civilian peasants were slain, dressed in fatigues and passed off by their killers as rebels. To date, 601 members of the military have been convicted in such killings, out of 1,948 accused, according to the chief prosecutor’s office.

Any peace deal will have to address that sensitive issue, as well as what to do with any FARC leaders commanders accused of war crimes.

“While police and soldiers keep getting killed be these criminals, their former commanders are talking at the table,” complained Uribe, who opposes the peace talks, favoring instead attempting to win militarily. Also named to the negotiating team by Santos was Gen. Oscar Naranjo, who stepped down as national police director in mid-year and now advises Mexico’s president-elect.

Attorney General Eduardo Montealegre has suggested that combatants on both sides found guilty of abuses could face non-prison punishment, though anyone implicated in crimes against humanity such as kidnapping and massacres would have to be barred from electoral politics.

FARC leaders expect a political future, not a life behind bars, to be the outcome of any peace deal.

Few Colombians believe peace can be achieved without the military’s buy-in. It has, after all been a key power broker in a nation with a traditionally weak central government. The armed forces controls $14.4 billion in annual budget, has 430,000 people in uniform including police and has the ear of Santos, who was defense minister from 2006-2009.

In that job and as president since mid-2010, Santos oversaw the unprecedented killings of three top FARC leaders, including the rebels’ top commander. He was also able to exert greater control over the military.

Some Colombians don’t believe that control is very firm. Or that a man such as Mora who vociferously opposed previous talks can be a good-faith negotiator.

They include Andres Pastrana, Colombia’s president during the failed 1999-2002 parley. He called Mora “the Colombian that is the biggest enemy of peace.”

Mora himself did not respond to repeated phone messages left by the Associated Press seeking comment.

But he did indicate to Caracol TV in a brief statement that he was entering the talks with an open mind.

“I believe that 99 percent of wars in the history of the world have ended at the negotiating table, and we are no exception,” Mora said.

Isacson, the WOLA analyst, believes Santos’ choice of Mora and Naranjo as negotiators “has weakened the position of critics like President Uribe, and it helps deliver the military.”

Belisario Betancur, a conservative who was the first to negotiate with the FARC as president, from 1982 to 1986, agreed.

“Peace,” he said, “is signed by the combatants.”