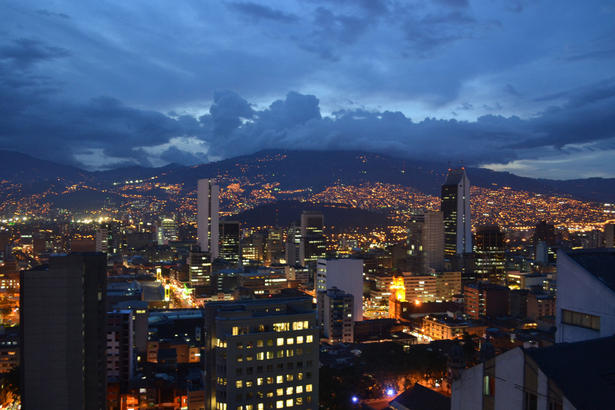 MEDELLIN, COLOMBIA—The arrest of the crime kingpin Erick Vargas Cardenasin Copacabana, just outside of the Colombian city of Medellin, on Aug. 8 made little more than a ripple on international news wires.

The scruffy, ponytailed man being led away by police cut an anonymous figure in photos — and a stark contrast to the iconic images of Medellin’s most famous son, Pablo Escobar.

Cardenas, known as “Sebastian,” headed the Oficina de Envigado (Envigado Office), a powerful mafia that emerged from the criminal networks of Escobar’s Medellin cartel. Since his arrest, the city has been buzzing with speculation about what will become of the criminal dynasty founded by the world’s most famous drug lord.

Names of possible successors are whispered among the gangs that rule the city’s hillside slums, while rumours fly about a possible war of succession or a confrontation with the Oficina’s rivals — a neo-paramilitary group that has been advancing on Medellin from the north, the Urabeños.

Sebastian’s grip on the Medellin underworld had become tenuous and the Oficina’s influence has been in decline, leading some to speculate that, with his arrest, the Oficina may fracture and Sebastian may enter history as the last of the Medellin cartel kings.

The Oficina de Envigado — named after the small town on the edge of Medellin where Escobar grew up — began as one of the Medellin cartel’s bands of enforcers.

Escobar had already built his cartel into a criminal empire of unprecedented power and wealth through a combination of ingenious smuggling techniques and extreme violence.

El Patron, the boss, as Escobar became known, extended his reach into every corner of Medellin life. He entered politics as a deputy congressman with the Liberal Party, threw lavish parties for celebrities and socialites and cultivated a Robin Hood image by funding public works projects.

In the cartel’s heyday, drug money flowed into Medellin so quickly it was weighed, not counted. “It was like a boom — youths would one day suddenly show up with a motorbike, expensive clothes and prostitutes,” said Sergio Patiño, a Medellin native who witnessed the transformation of the city as Escobar laid the groundwork for the criminal empire that today is run by the Oficina.

The wealth came at a price and violence consumed the city. After Escobar declared war on the state and his rivals, the Medellin murder rate hit 381 per 100,000.

It was Escobar’s capacity for war without quarter that would eventually bring about his downfall, a final act in which Escobar’s own contract killers in the Oficina de Envigado would play an instrumental role.

In 1993, police gunned down Escobar on a Medellin rooftop. However, they owed the opportunity to the efforts of a shadowy group known as the PEPES (People Persecuted by Pablo Escobar), who drove Escobar out into the open with a relentless attack on every facet of his business and personal life. Among the PEPES founders was an Oficina hitman, Diego Murillo, who turned on Escobar after the patrontried to have him murdered.

Escobar’s death was the first time the Colombian authorities heralded the end of the Medellin mafia, a pronouncement they echo today with the capture of Sebastian. Colombian President Juan Manuel Santos described it as “a mortal blow for the Oficina de Envigado.”

But Escobar’s downfall led to a new generation of Medellin criminals. “The idea that with the death of Pablo Escobar, the Medellin cartel died is a fallacy. It is a lie,” said Fernando Quijano, a human-rights activist and organized crime investigator. “What the cartel did is transform itself.”

This transformation was carried out by Escobar’s ally-turned-enemy, Diego Murillo, and his cadre of lieutenants — Sebastian among them. Murillo, better known as Don Berna, quickly established himself as the new patron and the Oficina de Envigado as the dominant force in the Medellin underworld, the legitimate heirs to the Medellin cartel.

Although ruthless with his enemies, Don Berna forged powerful alliances across the country, most significantly with the United Self-Defence Forces of Colombia (AUC), a far-right paramilitary group terrorizing the country as it waged war against Colombia’s leftist guerrilla insurgencies.

Don Berna combined his position as Medellin drug lord with a new role as an AUC commander. He led a Medellin-based paramilitary unit into successive urban wars, first to drive out the guerrillas’ urban militias, then to destroy paramilitary rivals who had questioned his criminal operations.

“It was a mix of the mafia and paramilitarism,” said Quijano. “He brought together these two currents, these two types of crime.”

The conflict killed thousands of young people, but left Don Berna with a level of control over the Medellin underworld that exceeded that of Escobar and would dwarf the fragile grip of those who came after him, including Sebastian.

By 2004, Don Berna’s wars had come to an end and the Medellin murder rate dropped to unprecedented lows. Within the city, the decline was attributed to a deal allegedly struck between Don Berna and the authorities; the city’s murder rate would fall if Don Berna was allowed to run the Oficina without interference.

According to Quijano, the transformation was only on the surface. “(Don Berna) gave the order that no murders should be seen — so they chopped up (the bodies), they buried them and they burned them . . . this was the famous peace,” he said.

In 2008, the Colombian authorities changed tack and extradited Don Berna to face drug charges in the United States after he had been arrested in connection with the murder of a local politician. His departure sparked the decline in the Oficina that has left it fractured and vulnerable.

After Don Berna, “it was quite clear there was no centralized control,” said Jeremy McDermott, director of the organized crime analysis group Insight Crime and an expert on Medellin’s gangs.

“People began to do their own thing, which they would never have done under Don Berna. The Oficina ended in the sense that it stopped being the hierarchical organization that exercised hegemony over the Medellin underworld.”

In the chaos that followed Don Berna’s extradition, several presumed successors quickly came and went — some turned themselves in to the authorities, others were arrested. Erick Vargas Cardenas stepped into this power vacuum, but his ascent to Escobar’s old throne was blocked by a rival — Maximiliano Bonilla Orozco, alias Valenciano.

The two fought a bitter war for the right to be known as the next patron and Medellin’s murder rate more than doubled in the space of a year. Sebastian’s victory owed much to the loyalty he commanded among most of Medellin’s neighbourhood gangs, known as combos, which have run the city at the street level on behalf of their mafia paymasters since the Escobar era. His position as the new don was cemented in 2011 when Valenciano was arrested.

This latest war left Medellin divided and Sebastian without major international drug trafficking contacts, which had been controlled by his rival. The combos tried to make up the difference in income by ramping up street-level drug dealing, extortion, gambling and prostitution. Some of the bigger gangs began to source cocaine base outside the city, which they could process into powder to turn a huge profit.

According to McDermott, with the extra income some of these gangs evolved into “super combos,” which have grown too large and independent to be controlled by the remnants of the Oficina hierarchy.

“They are not going to submit unconditionally now to a leader,” he said. “Anyone who wants to work with them will have to negotiate with them as partners.”

McDermott believes the name of the Oficina will live on, but only to describe Medellin’s fluid criminal networks, bringing an end to the era of cartels and kingpins.

Fernando Quijano doesn’t believe Sebastian will be the last Medellin don, pointing to the list of potential replacements currently circulating in the city’s underworld. He also believes the combos will continue to rely on a larger organization for protection. “Independence kills,” he said.

The landscape is complicated by the presence of the drug-trafficking neo-paramilitaries, the Urabeños, formed from the remnants of the now-demobilized AUC and led by Henry de Jesus Lopez, alias Mi Sangre.

Since the end of the war between Sebastian and Valenciano, the Urabeños have been quietly surrounding Medellin, assuming control of the key drug corridors while making incursions into strategic neighbourhoods inside the city.

“They are forming a ring,” said Quijano. “When they manage to close that ring they will suffocate (the city) and afterward they will come for everything.”

At the time of Sebastian’s arrest, skirmishes were already breaking out between combos loyal to the Oficina and others fighting on behalf of the Urabeños. According to Quijano, what remains of the Oficina leadership is split over whether to negotiate or fight with their rivals; the Urabeños are prepared for both options.

For Quijano, who recently survived an attempt on his life by Oficina hit men, whoever emerges to replace Sebastian as the public face of the Oficina — whether from the Urabeños, the Oficina leadership or even the combos — will not be a true patron in the mould of Escobar or Don Berna.

Instead they will be little more than a figurehead to unite the underworld and obscure where the real power lies — with the mafia and paramilitary families of years gone by, now keen to remain in the shadows and avoid the fate of Escobar.

“(The heads of the Oficina) have power and they have money, but they are not the real bosses,” he said. “The so-called Oficina is a façade. It is the wall that stops us seeing the reality of the mafia.”

From the Toronto Star