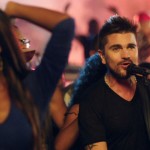 The first single of the as-of-yet untitled new album is called “La Luz” (The Light) and was produced in a collaboration between the Colombian rock-star and Steve Lillywhite (The Killers, U2).

The song which was recorded in Los Angeles with the help of Emmanuel “Meme” del Real (Mexican rock band Café Tacuba), is a up-tempo track with South American rhythms which contrasts Juanes’ rather classic rock style of the Albums before.

Juanes turned to Colombia’s historic town of Cartagena to shoot the video which shows him preforming in a Latin-style block party surrounded by attractive male and female dancers and can be watched on video platforms like youtube or Vevo.

Regarding the changes of his musical style, the Medellin native stated in an interview with Latina Magazine earlier this year that even though the new album will include some novelties like more songs in English, his music would still be “constant and authentic as ever;” always staying true to a Colombian essence.

The upcoming album will be his first studio project since 2010′s “P.A.R.C.E.” and first major release since last year’s “MTV Unplugged” session, which was a great success in Latin American album charts.

In 2010, Billboard magazine named Juanes as the “star of the decade.” He’s sold more than 15 million albums world-wide and has won than 17 Latin Grammy awards.