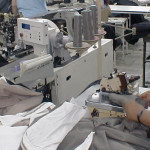 Industrial production in Colombia continued to drop throughout September when the national statistics agency registered a contraction of 1.8% compared to the same month last year.

In its monthly report, statistics agency DANE said employment in the manufacturing industry dropped even more; 2.7%.

The country’s industrial output has shown a steady drop since the first half of 2012 when a free trade agreement with the United States came into force, allowing American producers access to Colombia’s consumption market without paying tariffs.

In the first nine months of 2013, industrial output decreased a total of 2.5% compared to the same period last year.