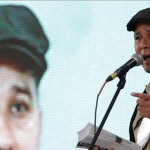 Farmers representing Colombia’s coca, marijuana and poppy growers met Wednesday in Bogota to advocate for their human rights, and influence the peace talks taking place between the government and rebel group the FARC.

The farmers suggested creating an organization  to assert “regulation policies” replace “war policies” as the country attempts to tackle its problems with illicit drug cultivation and trafficking.

Negotiators in Cuba are currently on the third discussion point out of six, working towards the ratification of peace deal that would officially end Colombia’s fifty year civil conflict between left-wing rebels and the government.

A spokesperson for illicit crop cultivators Cesar Jerez said the that solutions reached must also serve as solutions for who livelihood depends on in growing the illicit plants.

“The meeting calls attention all the way to Havana that the agreements cannot be short or relative, but must also include solutions for those involved in the cultivation,” said Jerez, who is also spokesperson for National Association of Farmer Reserve Zones.

Jerez went on to lament that throughout Colombia, “there are thousands of farmers locked away in jail.”

In Bogota, 150 delegates gathered, representing farmers from some of the most divided and punished by the country’s civil conflict and problems associated with drug trafficking and cultivation.