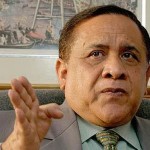 Prosecutor General Eduardo Montealegre told media he took the measures because General Miguel Maza, who was head of the now defunct government security organization DAS, had not taken the proper measures to ensure the safety of Galan.

Montealegre said there had been threats against Galan that Maza was aware of but had not reacted adequately given the security situation in the country at the time.

Montealegre also leveled allegations against Mazaof a strong relationship between DAS, the general and the group that assassinated the leading liberal candidate.

“This is a case of a human rights crime,” said Montealegre.

Popular liberal presidential candidate Galan was assassinated during a public appearance in the central state of Cundinamarca by members of the Medellin drug cartel which he had riled due to a proposed extradition treaty with the United States. He was expected to win the 1990 presidential elections.