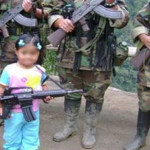 The country’s oldest rebel group FARC was accused by Colombia’s highest UN representative of continuing to recruit minors as the ongoing peace process continues, according to local media on Monday.

The accusation against the rebel group was made by the UN’s highest representative in Colombia, Fabrizio Hochschild.

“Every day, child recruitment is happening. I was in the Cauca region a few days ago and heard testimonies of children between nine and 15 years that have been recruited by the dozens in recent months by the guerrilla, a fact that cannot be ignored,” Hochschild was quoted saying by local newspaper Vanguardia.

This corroborates with military reports of eight cases of child recruitment since the FARC unilaterally declared a ceasefire on December 15.

“These cases occurred in areas where the conflict is on the rise. We know that in the Antioquia region there were two reported cases, one in the region of Choco, two in the Arauca region and three near Putumayo,” a military source was quoted saying in the same Vanguardia article.

In a study of 3,000 demobilized child soldiers which was partly published by national newspaper El Espectador earlier in September, the FARC was accused of systematically recruiting minors.

The Prosecutor General’s Office report stated that of the 5,075 child soldiers who demobilized from illegal organizations between 1992 and 2012, 59% belonged to the FARC.

Recruiting children under the age of 15 to “participate actively in hostile activities” is a war crime according to the International Criminal Court (ICC), while the United Nations sets 18 as the minimum recruitment age for participation in an armed conflict.

While not being part of the official peace talks’ agenda, Human Rights Organizations and politicians demanded to include the topic in negotiations which just ended their 18th round focusing on the rebel group’s involvement drug trafficking.

Peace talks will resume after the Holiday season ends on January 13, 2014.