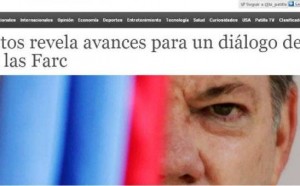 Colombia’s National Liberation Army (ELN) guerrillas have welcomed an agreement between the Colombian government and another rebel group, FARC.

ELN said in a statement on its official website Monday that the agreement on post-conflict political participation represents an early “Christmas gift” for Colombians.

However, the guerrilla group questioned whether a final peace deal could be reached between FARC and the government, as the two sides have only managed to agree on two of the five points on the agenda after a year of negotiations.

“Would the next government, whoever it may be, fulfill this agreement as a state policy? President Santos himself, would he carry out these democracy promises even if there is not a peace agreement with the guerrillas?” the ELN statement said.

The National Liberation Army (ELN) is the second largest guerrilla group in Colombia after FARC, with 1,500 members according to government data. It approached the government to initiate peace talks this year.