(Bloomberg) Colombia’s economic growth accelerated in the third quarter, led by construction and agriculture, after the central bank cut interest rates seven times in the nine months through March. 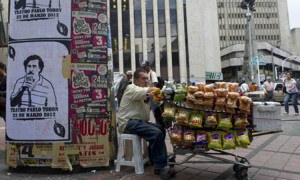 Gross domestic product expanded 5.1 percent from a year earlier, compared with a revised 3.9 percent in the second quarter, the national statistics agency said today in Bogota. The expansion was faster than the 4.3 percent median forecast of 31 analysts surveyed by Bloomberg. GDP expanded 1.1 percent from the previous quarter.

“With this number, it’s very unlikely, if not impossible, that people will continue to think about an interest rate cut,” Perez said in a phone interview. “It tells you that they will probably raise rates sooner, in March or April.”

Construction Boom
All but one of 26 analysts surveyed by Bloomberg forecast that the central bank will leave its policy rate unchanged for a ninth straight month at its December meeting.

Policy makers cut the benchmark interest rate by 2 percentage points between July 2012 and March, pushing it to 3.25 percent. Colombia’s third quarter expansion compares with 4.4 percent growth in Peru and 4.7 percent in Chile.

Unemployment Rate
The national unemployment rate fell to 7.8 percent in October, its lowest level since 1995, led by increased employment in service industries such as hotels and restaurants. The government will raise the minimum monthly salary next month, with employer groups offering 4 percent and labor union leaders demanding 6 percent. The current level is 589,500 pesos ($303).

Even as growth accelerates, inflation has slowed. Consumer prices (COCPIYOY) rose 1.76 percent in November from the year earlier, the slowest pace since 1955, as food and housing costs fell.

In the minutes to its November meeting, the central bank’s board said that the “sharp and unexpected” drop in inflation would create conditions for more monetary stimulus if growth was at or below expectations. Mexico, Chile and Peru all cut interest rates in the fourth quarter.

Santos said this week that Colombia can achieve “Asian” levels of growth if it invests in infrastructure such as 4G telecommunications technology, and if a peace deal with Marxist guerrillas brings an end to the country’s civil conflict.

Government negotiators have held talks since November last year with representatives of the Revolutionary Armed Forces of Colombia, or FARC, in Havana, in a bid to end a 50-year war.