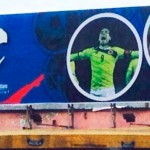 The image of the Colombian striker was displayed in a political propaganda billboard in the new national team’s jersey, until it got removed only a few hours after first being put up.

“I want to clarify that I am neither part of a political party nor do I support any particular one. The use of this picture happened without my permission,” reacted Falcao, also known as “El Tigre”, via Twitter.

A representative of the Colombian soccer federation told local radio station RCN that they are considering pressing legal charges against the Conservative Party for copyright infringement.

“We are surprised, even shocked about this. Soccer is a private organization and possesses certain rights which at this moment we feel have been infringed. We didn’t receive any request, neither did we pass any authorization for the use of this image that belongs to us,” the representative told to RCN La Radio.

Confronted with these allegations, the head of the party’s local section, Rafael Serrano, denied any responsibility for the campaign.

“They told me the billboard comes from the Conservative Party national board in Bogota. We don’t interfere with the national publicity strategy of the party. They told us the billboard should show Falcao as an example to reach your goals with hard work and perseverance,” Serrano told local newspaper El Colombiano.