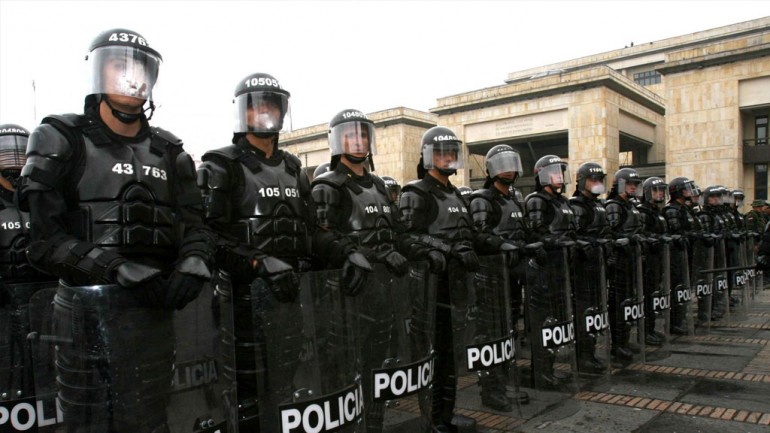 Colombia’s Congress on Wednesday became the center of controversy after approving an updated police code that would allow police to enter people’s homes or detain a person without warrant.

The bill, proposed by Senator German Varon of the center-right Radical Change coalition party, would allow police to temporarily detain a person or enter a home if there exists a suspicion of the use of drugs or alcohol.

Additionally, the bill would limit social organizations’ ability to protest.

While the majority of lawmakers in the Senate commission claimed the bill is fair and serves to promote peaceful co-existence and effective policing, opponents in both the leftist opposition and the coalition said the bill affected Colombians’ civil liberties.

Especially the article that would allow police to enter a home in the case the attending officer suspects the use of alcohol or drugs, meant to diminish nuisance in the case of celebrations or parties, caused a storm of criticism.

“Imagine a policeman making the interpretation when he can enter a home because people are drunk or because he believes they could be up to something bad,” coalition senator Armando Benedetti (U Party) told reporters.

Benedetti was supported by leftist opposition party Democratic Pole, whose senator Alexander Lopez told press the bill “is a security statute, not a police code” that “limit the individual freedoms of citizens.”

The opposition was mainly upset over an article that further regulates street protests and amplifies police authority to break up these protests.

“Currently, a mayor is informed of a protest after which you can go ahead, but here they want that first, [a mayor] is informed three days prior and worse, police can disperse the protesters if someone is drunk or affecting mobility,” Benedetti said.

According to Lopez, the article allows government authorities to “suddenly prohibit the right to protest, to peaceful congregation” and is “extremely harmful for Colombians’ fundamental rights.

The government began to promote an update of the police code after major anti-government rural protests that took place in 2013 amid a major economic crisis on the countryside.

During these strikes, farmers and miners, joined by truckers and indigenous groups, blocked roads, nearly collapsing the economy. Police intervention left more than a hundred protesters in hospital and many dozens in jail.

The United Nations protested the violent police response, claiming at the time that authorities “have violated and are violating human rights.”

Subsequently, the government has promoted the ban on the restriction of mobility during protests, something that according to the new bill could apply to any march.

Before being sent to the president for ratification and the Constitutional Court for approval, the bill will have to pass both plenary chambers of Congress.

The post Colombia’s Congress wants to allow police to enter homes without warrant appeared first on .