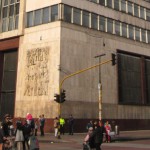 The central bank of Colombia has left interest rates unchanged in their meeting on Friday morning.

This maintains the historic low interest rate of 3.25% which Colombia has kept since March this year, said the official report from the Banco de la Republica, Colombia’s central bank.

The bank cut 2 whole percentage points between July 2012 and March 2013 to its current rate in efforts to boost a flagging economy.

Before the announcement, it was speculated by wire agency Reuters that the bank would leave rates unchanged pending further information on the economy, more specifically the data of Gross Domestic Product (GDP) in the the third quarter, due on December 19.

Economists expect an improvement in the global economy in coming months to boost Colombia’s growth, but also risks exceeding the 3% inflation target.