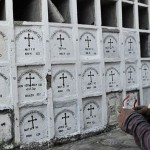 Only 100 municipalities out of 1,000 responded to a Prosecutor General Office’s survey in an attempt to identify over 2,000 unidentified bodies in Colombia’s cemeteries, local media reported on Monday.

The over 2,000 unidentified cadavers in Colombian cemeteries and morgues range from natural deaths to traffic accidents and murder. According to the Prosecutor General’s office, most of the bodies could have been identified if the local police and coroners had done a more rigorous job.

A scientist from the Prosecutor General’s Office told Colombia’s Caracol Radio, “Once we know there is a certain number of unidentified bodies in a cemetery, a scientific team will be made available to identify the body, and perhaps a person looking for their loved one and reported them as missing would have been given a response by now.”

However, regional support and commitment to help the Prosecutor General’s Office to identify the bodies has been lacking.

According to Caracol, the municipalities that responded to the surveys showed a lack of interest in the topic, and in some cases, local officials were either unprepared or not knowledgeable enough to handle the cases properly.

The states with the most unidentified bodies are the southern states of Caqueta, Nariño, Putumayo, and the central states of Cundinamarca, Antioquia, and Meta.