Colombia’s authorities seize more than one ton of FARC explosives 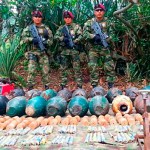 Colombia’s Armed Forces in the southwest state of Cauca seized over one ton of explosives, dismantled a bomb factory and discovered a boat belonging to FARC guerrillas, according to local media reports Wednesday.

The military operation in the municipality of Saurez, Cauca, uncovered a clandestine explosive factory that authorities said was capable of producing 600 explosive artifacts per month.

Authorities claimed the bombs were to be used by the FARC’s sixth-front operating in the area.

In total, over one ton of deadly explosive anfo was captured by the authorities along with other materials used for construction artisan bombs.