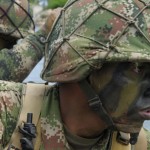 Colombia’s armed forces released a report Sunday detailing accomplishments during 2013, including the capture of 3,700 members of the FARC, the ELN, and illegal criminal groups.

The report also highlighted the armed forces’ confiscation of 91.4 tons of explosives and 18,000 detonation devices.

In addition, the army reported the capture of 1,015 members of armed criminal groups and 376 drug traffickers.

Leonidas Zambrano alias ‘Caliche’ was the highest level FARC commander killed during the year, which Defense Minister Juan Carlos Pinzon called “a blow to the heart of the terrorist orgainzation.”

The report comes as peace talks between the government and the FARC continue in Havana, Cuba. in over a year of negotiations, negotiators have reached compromises on issues of land restitution and political participation and are currently working on a deal over a solution to drug cultivation and trafficking.