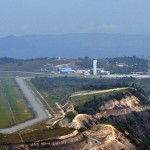 The concerns voiced in the Colombian Senate last week about the poor conditions at several major Colombian airports are “true and disturbing,” according to the head of the Colombian Air Traffic Controllers Association.

“Many airports and aviation infrastructure in general in this country is in a sorry state and of great concern,” said Carlos Arturo Bermudez, President of the Colombian Association of Air Traffic Controllers, talking to Caracol Radio on Sunday.

He made his comments after Senator Carlos Ferro last week revealed photos and documents outlining the woeful state of some of Colombia’s airports.

The most disturbing report was that of a 26-foot (8 meter) hole in the runway of the Neiva airport in central Colombia, which makes it difficult for aircraft to stop. At the tourist hub of Santa Marta, the runway is allegedly so short that aircraft cannot brake normally.

In 2012 alone, there were also 70 cases of air traffic control losing radio contact with aircraft.

Despite the problems, Colombian air travel has increased in safety in recent years. Between 2005 and 2012, Colombian transport authorities said there was an 84% decrease in air accidents.

The discussion is particularly important as the numbers of Colombians flying every year continues to sky-rocket.

Total passengers carried reached 21.1 million for the period between January and September this year, in a nation of 47 million people: That’s an increase of 19.6%.

MORE: Domestic air travel in Colombia takes off: up nearly 20% in 1 year

Safety is not the only reason Colombia’s airports have come under fire.  Earlier this year, Bogota was voted as among the world’s worst airports, based on the quality of services, shopping, restaurants, bars and waiting lounges.