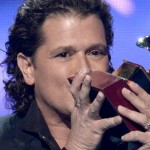 Vives secured the “Best Song of the Year” and “Best Tropical Song” prizes for “Volvi a Nacer,” and then “Best Tropical Fusion Album” for “Corazon Profundo,” in the 14th annual latin award show held in Las Vegas, Nevada.

“I want to give thanks to the Academy.  This is more than we were hoping for with our return,” the Colombian star said, referring to his four year hiatus from recording.  In 2009, his last album, “Clasicos de la Provincia II” was exclusively sold in the supermarket chain “Exito,” but still soared in popularity in Colombia.

In the past year alone, Vives has written near 40 new songs.

Unfortunately for Colombia’s legendary actor-turned-singer, Vives was not able to take home the two most important prizes of the evening, “Best Album of the Year” and “Best Recording of the Year,” according to newspaper El Espectador.  The former went to American-born Puerto Rican singer, Draco, and the latter went–unsurprisingly given the song’s immense popularity and radio airtime–to Marc Antony for “Vivir mi vida.”

Rounding out the Colombian wins, Felipe Pelaez and Manuel Julian took home the top prize for “Best Cumbia/Vallenato Album” for “Diferente.”  Perhaps this award was biased toward Colombians.

Some Colombians did come home empty handed unfortunately including nominated artists such as Maria Mulata, Bomba Estereo, and Andrea Echeverri.

The Latin Grammys are organized by the Latin Academy of Recording Arts and Sciences.