Bogota: More than 2,000 Colombians marched here Monday in support of the peace process that the government of President Juan Manuel Santos and FARC rebels will launch this month in Oslo.

The rally was called by a coalition of non-governmental organizations formed recently to support the process and demand a say in the dialogue.

“This is a demonstration in support of the dialogue process,” activist Javier Cuadros of the left-leaning Marcha Patriotica group said.

Cuadros said that, with this demonstration, the NGO coalition is also launching a struggle to expand the agenda agreed upon by the government and the Revolutionary Armed Forces of Colombia, or FARC.

The agenda with its six articles was agreed upon after six months of secret exploratory talks in the Cuban capital.

Cuadros told that the basic negotiating document should be extended to include the wishes of grassroots movements. 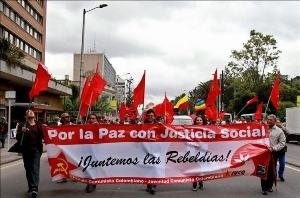 He also said that “mechanisms should be created to allow the participation of communities, non-government organizations and the people in forging peace with social justice, a truly long-lasting peace built from the bottom up”.

Peace talks between the Colombian government and the FARC will officially begin Oct 17 in Oslo, the Norwegian foreign ministry said last Thursday.

Norway will participate in the peace process as a mediator and host country, along with Cuba, while Venezuela and Chile will act as observers.

The accord establishing a framework for the peace process was signed Aug 26 in Havana after six months of secret exploratory discussions under the auspices of the Cuban and Norwegian governments.

The FARC has battled a succession of Colombian governments since 1964. The Marxist insurgency swelled to nearly 20,000 fighters in the early 2000s, but now numbers around 8,500 combatants.

Colombia’s armed forces, bolstered by billions of dollars of aid from the US, have scored dramatic successes against the FARC in recent years, but the rebels remain capable of inflicting significant damage on the military and on vulnerable infrastructure.