The 23 sculptures by Colombian painter and sculptor Fernando Botero and the plaza where they are displayed in the Colombian city of Medellin underwent a thorough cleaning on the weekend, a task participated in by both public and private institutions. 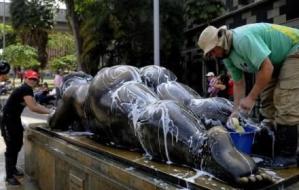 The head of the Antioquia Museum, Ana Piedad Jaramillo – who told Efe by telephone that the cleaning day will be repeated during the year – said the task was intended to raise awareness among the public that the works and Botero Plaza, located in the heart of Medellin, the capital of Antioquia province, belong to everyone.

She said that maintaining the site and the security duties performed by the police are important for those who work there and for the tourists who come to admire the work of the artist, who was born in that city on April 19, 1932.

Plaza Botero, she said, is the site housing the most works by the artist, who has been donating them in recent years.

She also said that this coming Tuesday the museum will present two books dealing with Botero’s life and work.

Botero: 80 años, by Colombian historian and researcher Santiago Londoño Velez, is a chronology of the life and work of the artist from his birth to date, and the second book is entitled “Fernando Botero – La busqueda del estilo: 1949-1963,” by Christian Padilla, a sculptor who holds a Masters in Advanced Studies in History from the University of Barcelona.

The commemoration of the artist’s 80th birthday began last March with a retrospective exhibit of 177 of his works at Mexico City’s Museum of Fine Arts, followed by his exhibition entitled “Viacrucis, la passion de Cristo” at the Antioquia Museum, along with other shows in the Spanish city of Bilbao and in Lisbon, Portugal.