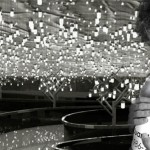 Colombian architect Juan Isaza has won one of three international prizes for a “Design for Death Architecture” for designing a China-inspired cemetery of lights that could be built in Colombia’s capital city Bogota.

A 27-year-old Bogota native and lighting designer, Isaza took home third prize for architecture out of over 1,300 submissions from all over the world.

The awards are announced during a festival held in Texas, where over 200 designs are showcased in a number of different categories: from re-imagining urns to exploring new ways to integrate death and memory of loved ones into every day life.  The biggest category is “Design for Death Architecture.”

Over 2,300 designers from more than 90 countries submitted entries into the competition.  Isaza was the only competitor from Latin America.

Isaza’s project, “Sky Lights” chose to abandon the old idea of cemeteries by taking urns with internal growing lights and hanging them on “family trees” scattered around a cemetery.  There would also be reflecting pools on the floor to capture the light and further illuminate the surrounding area.  This is so nature, water and light can play off of each other around the clock, and especially at night.

In addition to the trees, there would be a ceiling over the entire space on which the urns could hang in patterns forming constellations of the deceased.

Isaza wanted to dismantle preconceived notions about cemeteries; primarily the ideas that they have to be sad, cold, lonely gardens.

The young designer was inspired by the Chinese “Festival of Lanterns” that happens annually around the end of February.  Isaza was also inspired by the deceased victims of the armed conflict in Colombia.

Newspaper El Tiempo believes that this sort of design would be possible and welcomed by Colombia if they wished to create these cemeteries.

The competition was organized by architecture and design magazine and website, designboom.