Colombian victims of Typhoon Haiyan all accounted for, says consulate 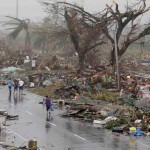 The Colombian consulate in Manilla claims it has contacted each of the registered Colombians in the Philippines and that all of them are safe following the devastation of Typhoon Haiyan.

“[…] We’ve contacted everyone in the resident registry. All of them are fine,” said Liliana Sorano, a secretary from the local consulate.

International diplomatic bodies are scrambling to locate their citizens as aid and rescue workers flock to the Pacific island nation in the aftermath of the most powerful storm ever recorded.

Haiyan brought 195mph winds and six-foot swells across entire sections of the Philippines, destroying cities and towns alike and plunging much of the county into desperate conditions.

Exact figures are still slow to emerge from all the damage, but more than 10,000 people are thought dead in the Layte province alone, with thousands more missing.

According to the Colombian consulate, though, no Colombian nationals have been claimed by the disaster.

Early national news reports in Colombia focused on Lina Calle, a Colombian native who was believed to have disappeared in the wake of the storm.

But now, Calle has reportedly made contact with her family and told them that she is well.

The consulate has not been able to confirm her whereabouts, due to taxed communication services in the area. But Sorano said that officials have spoken with Calle’s family, and are satisfied with their report.

The Colombian consulate did not specify how many residents it has on record in the country, or whether any tourists were present when the storm hit last weekend. But indications are that no Colombians have been killed and that all are safe and accounted for within the country.