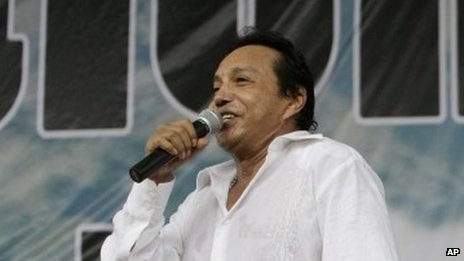 One of Colombia’s most popular musicians, Diomedes Diaz, has died of a heart attack at the age of 56.

Diaz was widely regarded as one of the best singer-songwriters of vallenato, a Colombian folk music style. He won a Latin Grammy award for the best vallenato album in 2010 and had just released a new CD, La Vida del Maestro (Life of the Master).

Diaz led a tempestuous life, serving time in jail over the death of a fan at a party in his home.

His wife found him dead in his bed in his hometown of Valledupar.

Tempestuous artist
Diaz often showed up late to concerts or not at all, something his fans put down to his addiction to drugs and alcohol. In 1993, concert-goers trashed the stage and stole valuable equipment when Diaz failed to show up at a concert in the town of Baranoa.

Despite his frequent no-shows, he was one of Colombia’s most popular artists, whose devoted fans became known as Diomedistas.

He sold more than 20 million albums over the course of his career, which began at an early age on the Caribbean coast.

Born in the northern province of La Guajira in 1957 to poor parents, he would often take to the stage at local parties.

His uncle, an accordion player, was the first to recognise his talent as a singer.

Diaz also wrote and composed songs and, while he worked as a bicycle messenger for a local radio station, his song La Negra was aired for the first time.
Jail time

In 1997, at the height of his career and shortly before the launch of his album Mi Biografia (My Biography), a fan and friend of Diaz, Doris Adriana Nino, was found dead by the side of a highway in Tunja province.

Forensic experts at first said that she had died of a heart attack following a drug overdose at a party hosted by Diaz, but a later forensic report suggested she had been suffocated.

After a lengthy trial, Diaz was sentenced to 12 years in jail for homicide, a sentence which was later reduced to six years.

Diaz, who had been put under house arrest, went on the run when he was due to be transferred to jail, allegedly hiding away in an area controlled by the infamous paramilitary leader known as Jorge 40.

He handed himself in to the authorities in 2002 and, after having his sentence further reduced, was released in 2004.

He rebuilt his career and released six more albums, the latest one just three days before his death.

Hundreds of people took to the streets of his hometown of Valledupar upon learning of his death.

The town’s mayor has declared four days of mourning.

His manager, Joaquin Guillen, said that “death would not silence [Diomedes Diaz], his fans and his songs will keep him alive”.