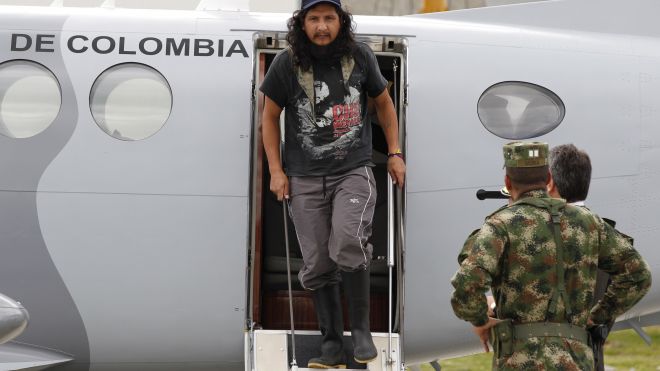 BOGOTA, Colombia –  A deserter from a Colombian guerrilla army has led an Ecuadorean hostage to freedom.

The rebel, whose name was not released, led Orlando Sigifredo Ibarra Sarmiento on a four-hour walk to reach troops in southwestern Colombia, the navy said in a communique as it presented the freed man before reporters Monday.

It did not identify the rebel from the National Liberation Army.

Ibarra, wearing a long black beard, said the rebels were preparing to move when “a comrade, an envoy of God, came up … and told me, ‘Brother, would you like to go home?’ … And I said, ‘Let’s do it.”‘

He said they walked until reaching a cellular phone signal and called the navy, which quickly sent troops to meet them.

In Quito, Ecuadorean Foreign Minister Ricardo Patino welcomed news of Ibarra’s escape after two years in captivity. “It was anguish both for his family and for Ecuador,” he said of Ibarra’s ordeal.

He said his father was killed in January while trying to make contact with the rebels to arrange his release.

The National Liberation Army is the second-largest of the leftist rebel groups that have been trying to overthrow Colombia’s government. It is believed to have at least 3,000 fighters.

The larger Revolutionary Armed Forces of Colombia announced earlier this year that it was freeing all of its hostages and last week it agreed to open peace talks with the government.

The National Liberation Army did not join in either agreement.

Colombian rebel groups have often used kidnappings to finance their operations through ransoms or to hold captives as bargaining chips.