Colombian president to have surgery for prostate cancer 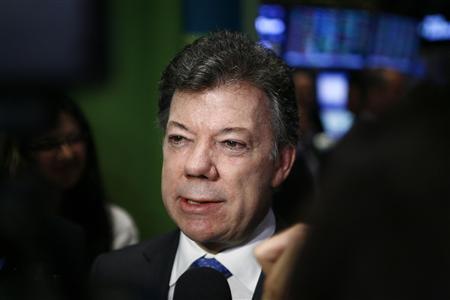 (Reuters) – Colombian President Juan Manuel Santos said on Monday he would undergo surgery for a non-aggressive prostate cancer in a health scare that seemed unlikely to derail his government’s imminent talks with Marxist rebels to end decades of war.

Santos, 61, said the tumor was discovered as part of a routine checkup and will be removed on Wednesday.

“It’s a small tumor located on the prostate gland and it’s a good prognosis. It’s not aggressive,” he said at the presidential palace in Bogota, flanked by his doctor and his wife. “There’s a 97 percent chance of being totally cured.”

The Harvard-educated economist, who took office two years ago, is about to embark on negotiations in coming weeks with the Revolutionary Armed Forces of Colombia (FARC), whose insurgency has led to the deaths of tens of thousands in half a century.

A successful end to the peace negotiations would help secure Santos a place in history and allow him to further build on the economic and security advances that began under President Alvaro Uribe a decade ago.

Colombia, a nation of about 46 million, has attracted record foreign direct investment over the last few years as a U.S.-backed military offensive against drug traffickers and FARC rebels improved business confidence.

Santos, who as Uribe’s defense minister dealt some of the harshest blows against the FARC, said he would not be handing over presidential duties.

The cancer was detected “very much in time” and his doctor expected the president to be able to make a quick recovery, Santos said. The surgery will be conducted with a local anesthetic at a hospital in Bogota.

“I am going to stay in the clinic a few days. I will be subject to a few physical limitations, but I will continue exercising my functions as president of the Republic,” he said.

Santos, who has three children, joins several other Latin American leaders who have fought cancer in recent years.

Venezuela’s Hugo Chavez, who seeks re-election on Sunday, has had three operations for tumors since mid-2011.

Former Brazilian President Luiz Inacio Lula da Silva was successfully treated for a throat tumor earlier this year and his successor, President Vilma Rousseff, was treated for lymphoma cancer in 2009 but has been given a clean bill of health by her doctors.

A flood of messages appeared on Twitter offering support for Santos, including best wishes from ally-turned-foe Uribe, opposition lawmakers and government officials.

“My solidarity and support to the President and his family,” said Vice President Angelino Garzon, who also was hospitalized recently. “The country, now more than ever, needs him.”

The peace talks helped lift Santos’ approval ratings at a time when he was being slammed by critics, like former boss Uribe, who said security had deteriorated considerably, raising the possibility he would be unable to seek a second term.

Negotiations with the FARC, which will take place in Norway and Cuba, have raised Colombians’ hopes of an end to the war.

Santos, who appeared alongside his soldier son earlier on Monday at a military event, seemed in good spirits and said that he had sought medical advice last week during a meeting of the United Nations in New York.

He left for Peru after the cancer announcement to attend a meeting of Latin American and Arab heads of state and will return to Bogota on Tuesday, a presidential spokesman said.