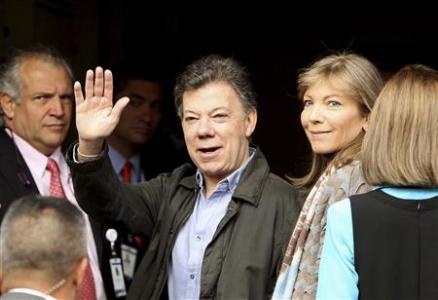 (Reuters) – Colombian President Juan Manuel Santos made his first public appearance after prostate cancer surgery on Thursday and said he was fine and working from his hospital room.

At a critical time in his presidency when Santos is about to start peace negotiations with Marxist rebels, the 61-year-old shocked the Andean country this week when he announced he was suffering from prostate cancer and needed surgery.

“Everything went fine … many thanks for all the messages and the statements from everyone, but fortunately we’re doing really well,” he told reporters from the window of his hospital room.

“We’re working here, but the doctors are telling me to take it easy.” His remarks to reporters standing outside the hospital were broadcast on television.

His doctors said the operation on Wednesday was successful and that Santos was recovering well.

“He continues to present a satisfactory evolution … He is active with stable vitals signs and no complications,” Adolfo Llinas, the director of Fundacion Santa Fe hospital, told reporters.

Santos’ treatment will not require chemotherapy, his doctors have said, and he will likely spend two or three days in the hospital.

“He is moving and he is handling his personal and family business, so if we continue this way, as it seems, we would be where we expected postoperatively,” said Felipe Gomez, Santos’ urologist.

The cancer surgery came days before the government was to begin negotiations with the Revolutionary Armed Forces of Colombia (FARC), an insurgency that has killed tens of thousands over 50 years.

Norway’s government confirmed on Thursday that representatives of Colombia’s government and the FARC will hold a joint news conference in Oslo on October 17 after beginning peace talks earlier in the same week.

The talks are expected to move to Cuba a week later.