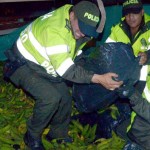 Colombia police on Thursday confiscated 3.6 tons of marijuana in a rural area just outside of the city of Medellin, according to local police.

The illicit drug were found in a truck.

Police were sent to the parking lot where the vehicle was parked after having received information over a potential shipment of drugs.

At the scene, the police located a truck loaded with more than a ton of bananas and noticed the distinct odor of marijuana.

In the truck, the police found packages containing 3.6 tons of marijuana hidden under the bananas.

According to the report, the shipment had just arrived from the state of Cauca, located in the southwestern part of the country, and was to be distributed in the city of Bello, a town bordering Medellin to the north.

No arrests were made as potential suspects were seen fleeing as the police arrived.