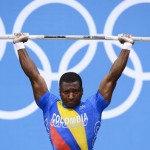 Over a year has passed since the Mayor of Cali announced a “special project” to build Olympic silver medalist Oscar Figuera a house in the city, the third largest in Colombia. And yet, according to the El Espectador newspaper, that promise has still yet to be fulfilled.

The mayor’s office has reportedly claimed it is still putting together the funds to pay for a house for the Olympic weightlifter, one of a handful of Colombians to medal during the 2012 London Games.

Legal snags in the municipal administrations have also reportedly held up the project.

The Secretary of Housing said the government of Cali would have to budget a cost of $38,375 to complete the weight lifter’s house in a nieghborhood called “Comuna 18″ in west Cali.

Figueroa, meanwhile, has said he does not want to trouble the mayor’s office or the Secretary of Housing, adding that he would not accept living in the the neighborhood for security reasons.

Cali is currently mired in gang violence, a situation the city ombudsman recently attributed to, in part, a lack of funding for police and schools.