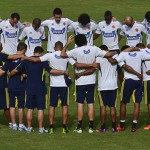 Nine players flew into Brussels Monday to join the Colombian national team as it trains for upcoming friendlies against Belgium and the Netherlands scheduled for this Thursday and next Tuesday, respectively.

Colombian Coach Jose Peckerman said the matches would give Colombia a chance to try some new players and make adjustments before heading to Brazil for the 2014 World Cup.

“The friendly games before Belgium and the Netherlands will give us a panorama of many things by closing this year with matches before great selections,” said Peckerman.

Early eliminations in the 1994 and 1998 World Cups have taught Colombian fans of basing high expectations on week exhibition competition. And Pekerman expressed excitement at the prospect of taking on two top international sides, with Belgium ranked 5th overall by FIFA and the Netherlands ranked 8th.

“Holland is one of the great teams of the world, both historically and presently, and it has had an overwhelming final season. Belgium has perhaps the best team it has ever had this generation with some of the best players in Europe,” said Peckerman.

But after the recent end to a long qualifying campaign, Pekerman will also be looking to test out new players, such as defender Eder Alvarez Balanta, from Argentina’s River Plate Soccer Club, and forward Victor Ibarbo, from Italy’s Cagliari Calcio.

With a group leader spot already secured for the 2014 World Cup in Brazil, Colombia will start eight months of preparation with two of the biggest fixtures on its schedule.