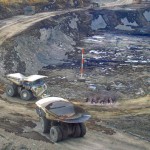 Following the mining firm’s decision to not renew the contracts of more than 600 workers, which had expired between December 2012 and March 2014, the coal industry union Sintracarbon decided to offer voluntary collective holidays to the workers.

886 employees accepted the offer and the initial dismissal of 448 workers was averted.

Jairo Quiroz, president of labor union Sintracarbon, announced that of the 448 contracts that were won in December, only 130 would be renewed.

The situation stems from Cerrejon’s move to close the Oregenal, Patilla and Comunero pits.  The decision was made because there was no water to control the dust generated by the operation.

Dust particles in the air had already exceeded ten times the permissible limit.

The workers were staffed at the company’s signature El Cerrejon coal mine, in the northeastern coastal state of La Guajira. Due to its location, the mine, one of the largest producers of coal in Colombia, the fourth largest global exporter, suffers from acute dry spells and, consequently, damaging levels of coal dust.

One of the largest coal mines in Colombia, Cerrejon currently employs 10,000 people, of which over 99% are Colombian nationals.

As Jairo Quiroz explains, though Cerrejons decision minimizes the mine’s impact on the surrounding environment, it also minimizes the need for workers.