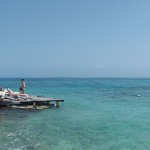 Isla de Pirata (Pirate Island) is a stunning and secluded island off the coast of Cartagena de Indias, northern Colombia.

Isla de Pirata is one of the 30 islands which makes up the Isla de Rosarios archipelago in the Caribbean Sea and sits off the northern coast of Colombia. Less than a mile long, the island is small, but with a limit of one boat a day there are rarely more than 20 people on the island.

A trip to Isla de Pirata trip costs 90,000 COP (44 USD) which includes the trip to and from the island, a freshly caught fish lunch and a canoe activity once on the island. The boat, or “lancha”, leaves from a dock just outside Cartagena’s city walls and takes approximately 50 minutes to arrive.

For visitors to the island there are two choices to pass the day. There’s the option of staying for the day, (8AM to 4PM) which includes a delicious lunch of grilled fish, caught nearby the island with coconut infused rice, platano and salad. Visitors who wish to relax a little longer can stay at cabins that range from honeymoon deluxe to 4-bed rooms complete with balconies. Residents will wake up to a practically deserted island until the boat arrives for the day.

There are plenty of activities once on the island, with sun loungers and canoes included in the original price.  If you’re willing to pay an extra 5 USD you can rent a snorkel or be taken to a small aquarium, which is a 20 minute boat ride away.

Although there are  people selling jewelry and other trinkets on Isla de Pirata, they are not overly persistent.

Visitors should also aware that as it gets close to lunch time, local fishermen will come round selling freshly caught lobster and langoustines: these are an optional extra as lunch of grilled white fish is included. However the fishermen will grill the lobsters fresh for you and they do taste wonderful.

The island offers a different experience than the more traditional choice of Playa Blanca which is often jam-packed full of other tourists, and trips also have hidden costs attached. For example a shade umbrella will cost 20 USD – a necessity in the Carribean heat!

For those wanting to stay on Isla de Pirata, it is possible to book in advance through the website below. However the easiest option is to go to the dock outside the old city the afternoon before you wish to leave and buy your ticket straight from the offices there.