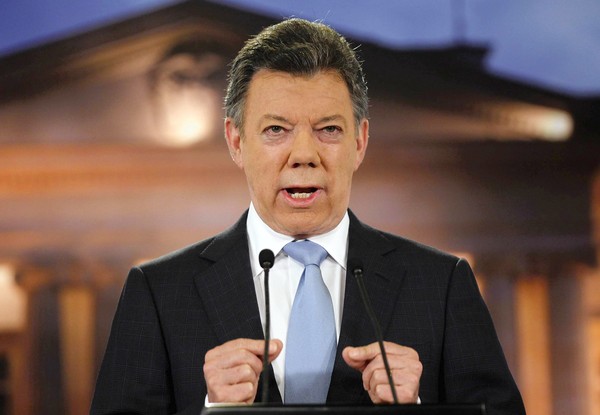 Bogota: Peace talks between the Colombian government and the Revolutionary Armed Forces of Colombia, or FARC, guerrilla group will officially begin on Oct 17 in Oslo, a spokeswoman for the Norwegian foreign ministry said Thursday.

Veslemøy Lothe Salvesen provided that precise date, which is slightly later than ones mentioned by the FARC in September, in remarks to Bogota’s RCN Radio.

The Colombian government thus far has given no exact date for the start of the formal peace negotiations, although President Juan Manuel Santos has said on different occasions that the process would get underway in mid-October.

Norway will participate in the peace process as a guarantor and a host country, along with Cuba, while Venezuela and Chile also will “accompany” the talks.

Santos publicly announced the selection of those four countries when announcing in late August that a deal to hold talks had been reached.

The accord establishing a framework for the peace process was signed Aug 26 in Havana after six months of secret exploratory discussions on the island under the auspices of the Cuban and Norwegian governments.

The Colombian government and the FARC have held formal peace talks aimed at ending a decades-old armed conflict on two other occasions.

The most recent negotiations, during the 1998-2002 government of president Andres Pastrana, took place in a demilitarized area of southern Colombia – dubbed “Farclandia” – and collapsed amid mutual recriminations.

The new process differs from the earlier failed attempts, according to the president, in that it will unfold outside Colombia.

Santos said in early September that the forthcoming negotiations will focus on rural development and improved access to land; security guarantees for the political opposition and activists; an end to armed conflict and the full demobilization of the guerrillas; the problem of drug trafficking; and the rights of victims of both the rebels and the security forces.

Santos’ decision to talk peace with the FARC has boosted his approval ratings and is supported by 60 percent of Colombians, according to a Gallup poll released in early September, while the smaller ELN insurgency has expressed an interest in joining the process.

The loudest criticism of the venture has come from Santos’ hardline predecessor, Alvaro Uribe, who called the peace process “a slap in the face to democracy”.

The FARC has battled a succession of Colombian governments since 1964. The Marxist insurgency swelled to nearly 20,000 fighters in the early 2000s, but now numbers around 8,500 combatants.

Colombia’s armed forces, bolstered by billions of dollars of aid from the US, have scored dramatic successes against the FARC in recent years, but the rebels remain capable of inflicting significant damage on the military and on vulnerable infrastructure.