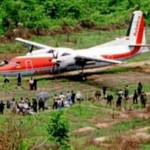 An internal investigation found the Colombian state guilty of illegally detaining airline mechanic Javier Mendoza in the aftermath of a 1999 mass kidnapping, authorities announced on Monday.

The national government will be forced to pay indemnity charges to compensate Mendoza for the 27 months he spent in jail, after the State Council determined that security officials had held Mendoza on “false evidence” and violated his basic rights.

The ruling pertains to the events surrounding the 1999 hijacking of an Avianca flight by the ELN rebel group, in which 46 citizens were kidnapped and subsequently ransomed.

Authorities at the time declared that employees on the ground had aided the guerrillas in the kidnapping, a claim which led to Mendoza’s detainment.

Later, in 2001, Mendoza was released on order of the Prosecutor’s General, when it became clear that there was no substantial evidence implicating him in the incident.