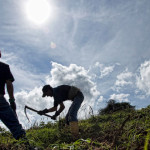 As President Juan Manuel Santos wraps up his trip to the United States, promoting the benefits of deepening trade trade ties between the two countries,  farm leaders back in Colombia continue to express concern over the long-term effects of the 2012 free trade agreement (FTA).

Policies removing import tariffs on agricultural goods originating from the United States pose a “serious threat” to Colombia’s rural economy, according to labor organizer Luz Dary Hernandez, a spokesperson for the Small and Medium Farmers Association of Boyaca and Agricultural Comprehensive Coordination Bureau for Boyaca.

“When all the potatoes and vegetables are replaced by cheap imports from the US, then where will be the proposal by the Colombian government each time this agricultural crisis intensifies?” said Hernandez in an interview with Colombia Reports.

“We are at a disadvantage. As small and medium producers it is very difficult to compete against subsidized agricultural products from the United States.”

Among the issues at stake was the US-Colombia FTA, signed last summer by Santos and United States President Barack Obama, which farmers hoped to place at the forefront of the national negotiations that brought an end to the protests in September.

On Tuesday of this week, however, over a thousand farmers took to the street of the Colombian capital city of Bogota, claiming that solutions have not been forthcoming to what President Santos himself has referred to as the economic “crisis” facing Colombia’s agricultural sector and demanding that actions be taken to remedy the situation prior to national elections next March.

Economists have pointed out that many of the provisions outlined in the FTA have yet to take effect in Colombia, as import tariffs are set to be loosened gradually over the next several years.

Hernandez and other farm leaders have claimed the prices of goods such as potatoes and onions are already too low for Colombian farmers to turn profits and are expected to drop precipitously during the implementation of the FTA’s policies.

According to a recent study by Oxfam International, the total value of rice imports to Colombia increased almost eight-fold in the first nine months of the treaty.

The price for imports fell by almost 85%, while U.S. products now account for about 80% of the Colombian market, reported Caracol Radio Thursday.

Dairy products, which make up a larger portion of Colombia’s domestic agricultural economy than rice, were another area singled out in the report.

“The consequences of this unequal commercial agreement are rapidly materializing,” said Adriana Rodriguez, Director of the NGO’s Colombian office, adding that the government should create a monitoring system to measure and mitigate price drops as a result of free trade.

Since September, President Santos and his administration have maintained they are working to fulfill the commitments already made to ease the impacts of the FTA on farmers, commitments small-scale and medium-scale farmers have called insufficient and unilateral.

MORE: Farmers have ‘no reason’ to talk of new strikes: Santos

Appearing on a prominent US talkshow this week, however, Santos once again praised the economic benefits of free trade, which he pointed to as a contributing factor in Colombia’s recent economic progress.

Thanks in part to the FTA, he indicated, Colombia now has the highest investment rate of any country in Latin America and Colombia has created more jobs than any other Latin American country in the past three years.