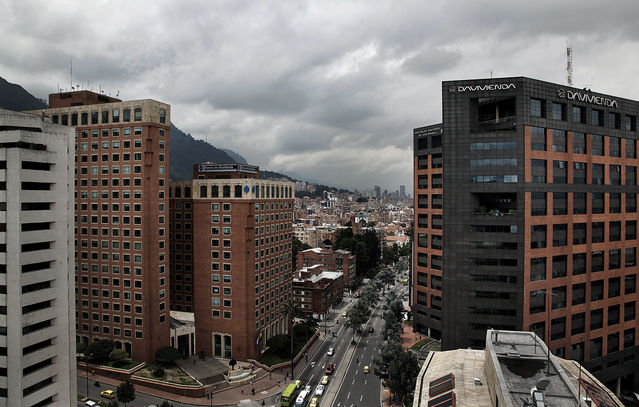 Buildings stand in the financial district of Bogota, Colombia.

(Bloomberg) Colombian banks are selling record amounts of foreign bonds this quarter, pushing this year’s tally above the total of the previous 13 years, as they take advantage of record-low U.S. rates to finance more lending.

Billionaire Luis Carlos Sarmiento Angulo’s Grupo Aval Acciones y Valores (AVAL) SA and Bancolombia SA (BCOLO) led sales of US$2.45 billion of bonds since July 1, compared with US$500 million the previous quarter and no sales in the same period of 2011. Lenders sold US$3.55 billion this year, topping the $3.14 billion issued from 1999 to 2011 and more than double the offerings from banks in Mexico.

The sales are helping fund a 17 percent lending surge as Colombia’s economy expands at the second-fastest pace among Latin America’s biggest countries, behind Peru. Bancolombia, the country’s biggest bank, issued $1.2 billion of 10-year bonds on Sept. 4 to yield 5.2 percent, down from 6.01 percent in a sale of similar-maturity notes in 2011. Each successful offering helped spur another bank to emulate the sale, said Shamaila Khan, an emerging-market money manager at Alliance Bernstein LP.

“Successful sales encourage other issuers with a similar profile to come to market,” Khan said in a telephone interview from New York. “The Latin American market has been dominated by Brazil and Mexico, so the appeal of getting the diversification, of going into some of these other countries that also have positive fundamentals, is very attractive.”

Aval’s $1 billion offering last week attracted almost $8 billion in bids while securities from Bancolombia and Banco Davivienda SA (PFDAVVND) were each six times oversubscribed, according to the banks. Aval’s sale capped a two-week period in which $2.2 billion of Colombian bank debt was issued, 90 percent of the total for the third quarter.

While there is appetite for Colombian assets, the surge in issuance from the Andean country in the last few weeks may have left investors “exhausted in the near term,” said Joe Kogan, the head of emerging-market debt strategy at Scotia Capital Markets.

“There has been a lot recently,” Kogan said in a telephone interview from New York. “You kind of wish they’d coordinated a little more instead of sending it all at once.”

Besides Bancolombia and Grupo Aval’s offerings this month, the Colombian government sold $557 million of peso-linked bonds in overseas markets on Sept. 14 and Colombia Telecomunicaciones sold US$750 million of 10-year dollar debt on Sept. 20.