MINING.COMAn illegal mining operation that funded a faction of the Clan del Golfo was dismantled over the weekend in a joint action led by the Colombian army, the National Police Force, and the Attorney General’s Office. 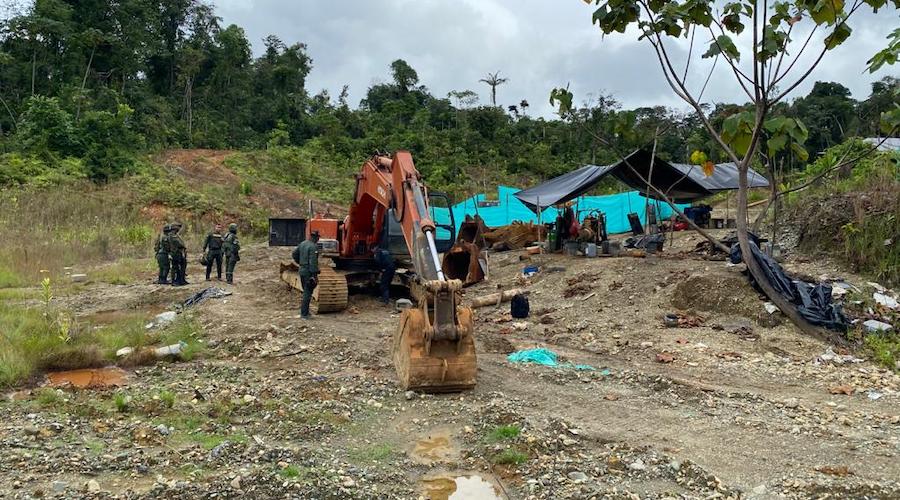 The Clan del Golfo (Gulf Clan) is a 3,000-member drug cartel and right-wing neo-paramilitary group that operates in the northwestern part of the country.

The illegal gold mine that was backing the group’s criminal activities was located in what is supposed to be a virgin jungle in the Chocó department. At the site, army and police officers found four backhoes hidden within the thick vegetation, engines, and other types of machinery, whose total value was estimated at over $400,000.

In a press conference, the Deputy Prosecutor before the National Courts, Deicy Jaramillo, said the unregulated gold extraction damaged two hectares of virgin jungle and polluted the Quito river, which is under an environmental and constitutional protection regime. Traces of mercury, fuel, and other toxic substances were detected both in the river water and the soil.

Two people were apprehended at the site and charged with damages to natural resources, invasion of areas of special ecological importance, and other crimes related to the illicit exploitation of mineral deposits. The couple refused to accept the charges.

Colombia’s Supreme Court ordered increased protection for one of the last...
Read more
- paying the bills -