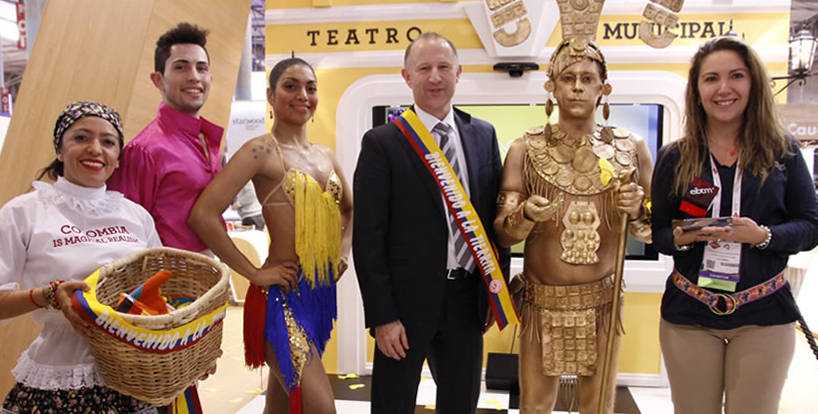 Colombia has set a target of earning US$4 billion in foreign exchange through tourism in 2014 and Trinidad & Tobago (T&T) is one of the countries from which it hopes to attract visitors.

As part of that strategy, Proexport Colombia, the agency responsible for promoting the country’s foreign investment, international tourism and non-traditional exports, launched the country’s new tourism campaign, Colombia is Magical Realism, at a networking event at the Colombian Embassy in Port-of-Spain, the capital of Trinidad and Tobago, last Wednesday evening.

“The message has switched from just coming to visit Colombia, to coming for an unforgettable magical experience,” says Carlos Gonzalez, executive director-Caribbean, Proexport Colombia. He explained that the campaign has specific objectives, including increasing visitor arrivals to the country, generating investment opportunities through Colombia’s tourism infrastructure, create employment and promote the country on the same level as other competitive destinations.

Gonzalez said the decision was made to focus on Colombia’s unique experiences after a study was done to determine the differential factor that motivated foreign tourists to choose the country as their vacation destination. The words magical, unique and surprising were the words frequently used by visitors to describe their Colombian experience and that set the tone for the new tourism brand.

Magical Realism evokes the literary genre that Colombia’s Nobel Prize winner, Gabriel Garcia Marquez, used in his stories that blended reality with magic. It also consolidates previous campaigns which have changed people’s perceptions and shown the charms of Colombian tourist destinations, as well as progress in terms of security and stability

Data from the World Tourism Organization and Migracion Colombia shows that foreign tourism grew at an average rate of 10.4 per cent from 2005-2012 — three times higher than the global rate for the period. The new campaign was launched last April by Proexport president Maria Claudia Lacouture and is currently being introduced throughout the Caribbean.

Gonzalez said Caribbean tourists have increasingly been choosing Colombia as a vacation destination and in the region it is the fourth most popular destination for visitors from Caricom nations after Mexico. “In 2012 we received 36, 113 travellers from the Caribbean region, an increase of 8.2 per cent from the previous year. In the first six months of 2013, there was a 9.4 per cent increase in visitors.

“We believe we offer a more appealing product for Trini tourists,” said Gonzalez. He described the Caribbean as “one of our natural markets” where T&T plays a key role. Gonzalez said Colombia’s regions offer a variety of tourism products which complement traditional ones, and allow visitors to enjoy natural attractions, culture, well being, sun and sand, and more in one destination.

While tourism was the focus on the Proexport networking event, Gonzalez said the agency was also working to boost trade and investments between the two countries. “We are looking to promote our country as the next destination for T&T nationals. We want your businesses to look to Colombia as a reliable, competitive supplier,” he said.

He said the country was a natural fit for companies looking to expand their presence in the region, offering a market of more than 47 million prospective customers, and providing a platform into surrounding markets, as far south as Chile and north into Mexico.